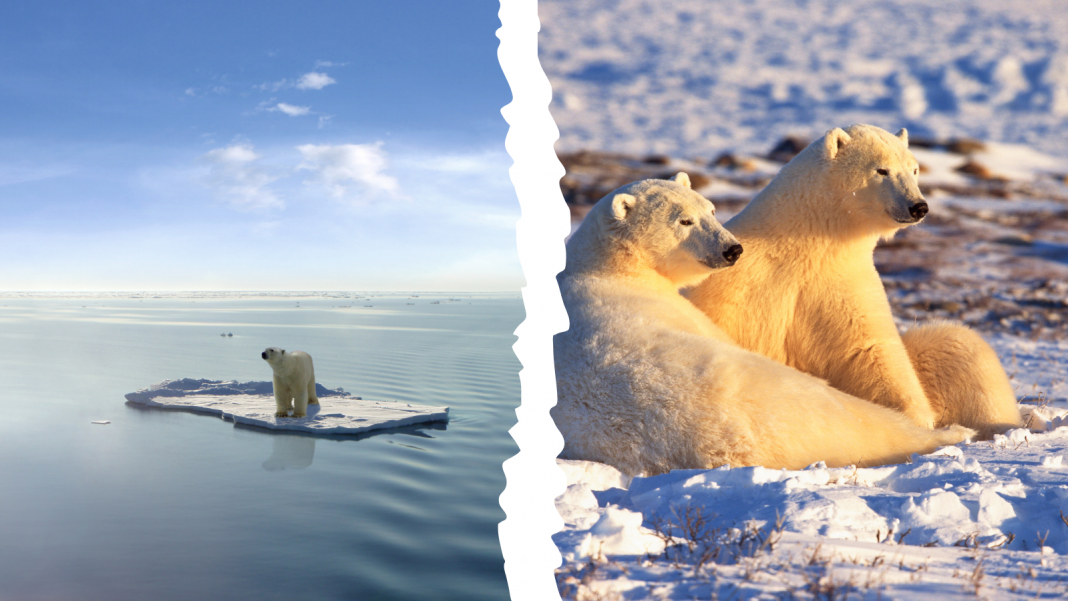 We’ve all seen it – the stark image of a gaunt polar bear stranded on a slab of ice, drifting away from shore.

Many wildlife advocates and government officials cited this particular photo as more evidence that human-driven climate change is pushing this species to the brink of extinction. 1

Is this an accurate depiction of the plight of the polar bear?

Before we answer this question, let’s take a step back.

The majority of polar bears are found in the Arctic Circle, with populations in Canada, Alaska, Russia, Greenland, and northern islands owned by Norway. 2 Among these, there are 19 recognized subpopulations.

Capturing accurate data on polar bear populations is a difficult task. An international association of experts known as the Polar Bear Specialist Group recognizes that nine of the 19 subpopulations are data deficient. 3

In other words, population estimates for known subpopulations may not be accurate indicators of the global picture.

Do these figures prove that polar bear populations are increasing? Not necessarily. Early estimates were largely based on stories from explorers and hunters rather than specific scientific surveys of populations. 89 Also noteworthy is that estimating polar bear abundance is difficult because the animals are often located in remote habitats and are found in low densities (small groups). 10

The most recent microanalysis of polar bear populations can be found in a report by the Polar Bear Specialist Group in 2019. The study found that out of the 19 polar bear subpopulations, five were stable, two increased, four decreased, and the remaining did not have sufficient data. 11  Evidently, we may know very little about global polar bear populations. Until more research is funded and better technology is implemented to accurately track polar bear populations, these numbers are simply best estimates using accessible tools and research methods over the last five decades.

But what is happening to the polar bears’ natural environment? Sea-ice abundance is one of the many variables that can affect the species. Sea ice, or frozen seawater that floats on the ocean surface, is found in the Arctic and Antarctic. The ice melts in the summer, though not completely disappearing, and refreezes in the colder, winter months. 12

Both the melting and freezing of sea ice are believed to be necessary to the polar bears’ survival. When ice melts, it releases nutrients into the water, stimulating the growth of phytoplankton – the most fundamental nutrient of the marine food web. 13 Regrowth of sea ice is also integral, as it restricts the effect of wind and waves in eroding coasts14 and provides more surface on which polar bears can live and travel.

While sea ice naturally melts during hotter months (due to solar radiation heating the ice’s surface16), satellite monitoring suggests that Arctic sea ice on average is melting faster than it is able to refreeze in the winter. Since 1978, satellites show that Arctic sea ice has declined every year. 17 Pinpointing the reason for this is complicated, as many factors are at play. Solar radiation, air temperature, and waves can all influence sea-ice melt.; Increased intensity of these effects can be attributed to climate change. Of course, the debate over how much climate change is caused by human activity is (it seems fitting) polarized.

In a BIG Media story on sea-level rise, author Brad Hayes notes that Earth’s ice sheets have been melting and, therefore, sea level has been rising since the peak of the last glacial maximum (ice age) about 21,000 years ago.

Sea ice has not declined the same way in all places, and effects of changes to sea ice abundance varies in different areas to different degrees. 18

The Arctic sea ice itself is a habitat for polar bears as well as for animals such as seals, Arctic foxes, and penguins. Polar Bears rely on secure, multi-year ice sheets (i.e. thicker sheets) to hunt. 19

Reduction in sea ice coverage can jeopardize polar bears’ ability to hunt. 20 As sea ice changes, the bears’ access to food sources – primarily ringed seals – changes. 21 The bears may have to travel farther in such scenarios. and in extreme cases risk drowning from exhaustion or hypothermia. Horror stories float around the Internet of polar bears swimming for more than 200 hours in search for food22 – but is this an accurate depiction?

Noting that sea ice in the region is strongly influenced by wind, currents, and temperature, the study found that polar bears were well adapted to changing marine environments based on their overall time spent swimming, capacity to dive, and ability to swim long distances.

Within that study, a group of 54 adult female polar bears were examined over a lengthy period, allowing for 818 monthly average values of percent time in water to be collected and analysed. Research showed that all polar bears spent time in the water. 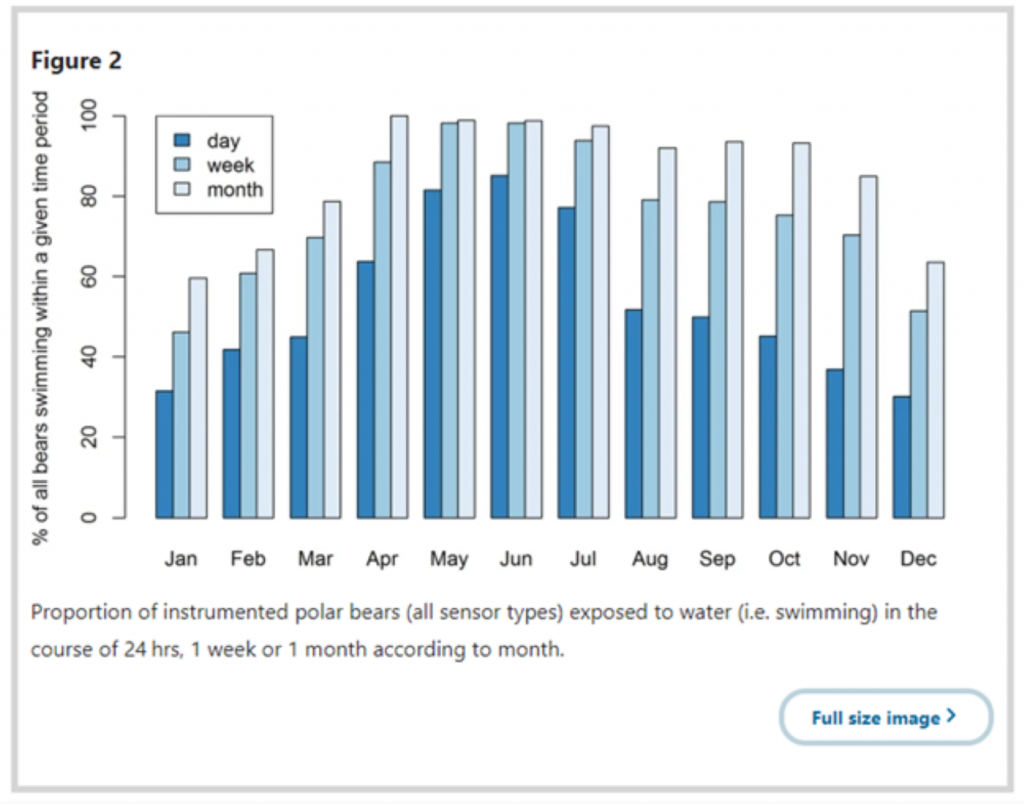 The data also offers insight regarding coastal versus offshore swimming. Of the same 54 bears, it was found that the majority did not make offshore excursions. The study found that 15 made at least one offshore excursion at some point, 34 did not make any offshore excursions, and five could not be classified due to limited tracking time. While acknowledging the additional costs, feasibility, and risks associated with shifting hunting strategies due to changes in sea ice, the study concluded that polar bears have the capability to include extensive swimming in their strategy.

Sea ice can also influence where polar bears decide to den. Naturally, the survival rate of cubs is crucial to polar bear populations. While some females build their dens on ice close to seal prey, inland dens can be 100 kilometers or more from the nearest shore. 24 There are many variables in the new cubs’ survivability – e.g. their mothers’ fat storages to provide nutrients, their ability to successfully migrate to coastlines after maturity, 25 and amount of suitable denning space.

As sea ice declines, changes shape, and/or becomes thinner, there are fewer suitable habitats for on-ice maternity, which can force polar bears to retreat farther from coastlines. 26

The relationship between sea ice conditions and polar bear health is not straightforward. While sea ice decline can have a negative impact on the polar bear’s hunting behaviour, other research suggests a positive effect in declining sea ice. The National Oceanic and Atmospheric Administration published its 2020 Arctic Report Card, which found that less summer sea ice led to more primary productivity29– i.e. abundant phytoplankton. This leads to fatter, healthier fish and ringed seals. Once winter arrives, these prey contribute to fatter, healthier polar bears. 30

The relationship between sea ice conditions and the predatory behavior of polar bears may be more complicated than what we see on the surface.

Changes in atmospheric and oceanic temperatures, increased solar radiation, and waves are linked to declining sea ice. While the melting and refreezing of sea ice is perhaps necessary cycle for ecosystem stability, shrinking sea ice in areas of the Arctic can influence certain polar bears’ ability to hunt and find suitable denning habitats. However, polar bears are capable of adopting offshore swimming into their hunting strategies and behaviour. Longer periods of reduced summer sea ice can promote primary productivity and positively affect polar bear health. All told, without further study of polar bear populations, it cannot be said that the global population is in decline.

Next time you are confronted with the disturbing image of a starving polar bear, remember that the opposite scenario is also out there; somewhere in the Arctic, a happy, fat polar bear is playing on the ice or enjoying a refreshing swim.

BIG Media
Our focus is on facts, accurate data, and logical interpretation. Our only agenda is the truth.
Previous article85-year-old goes into a vegan bar …
Next articleAmazon’s manufacturing arm enters Indian market