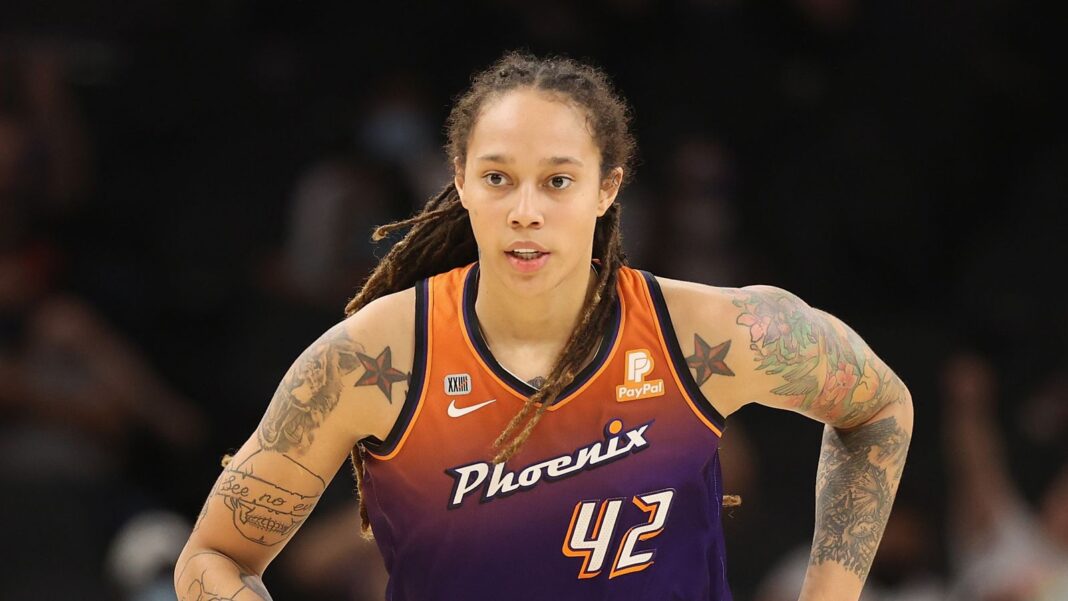 She’s arguably the greatest female basketball player of all time, and she’s been detained in Moscow amid the war in Ukraine. Fans want to know why more people aren’t paying attention, reports the BBC.

In one of the last public sightings of Brittney Griner, captured on CCTV, the American professional basketball player is seen walking through airport security trailing a small, black suitcase.

Griner, a star centre for the Phoenix Mercury, had landed at the Sheremetyevo airport, outside Moscow, on or around Feb. 17, there to play another season in a Russian league.

In the security footage, she wears running shoes, black sweatpants, and a black hoodie with “Black Lives for Peace” written on the back, her dark hair hanging in locs past her shoulders.

At 6’9″ (2.06 metres), she towers above the customs agents and other travellers. In another shot, she is seen sitting in front of a man, seemingly a customs agent, shaking her head “no”. Then, nothing – until a Russian mugshot emerged on state television last week.

Griner, 31, is believed to have been arrested by Russian authorities on drug charges. A month after her detention, little is known about her circumstances.

The uncertainty around her fate has fuelled an outpouring of support for the player, who is considered by fans and sports analysts to be perhaps the greatest female basketball player of all time.

It has also upset some fans who say the response to Griner’s detainment has been strangely muted. Fans and experts say that the attention she’s been given in comparison to male players exposes longstanding gender inequities in professional sports.

“If this was an NBA [professional men’s league] player of her calibre … this would be on the cover of not only every sports page but every news media page in the world,” said Tamryn Spruill, a sports journalist who is writing a book on the WNBA and Griner’s contributions to the league.

A native of Houston, Texas, Griner earned a basketball scholarship to Baylor University where she led the team to a national championship. She also won WNBA and Euroleague titles, and an Olympic gold medal. Famously, her ability to dunk is unmatched.

Off the court, she has also been seen as a trailblazer, coming out as gay at age 22, around the time of her entry into professional sport. She became the first overall draft pick in the WNBA that year and, soon after, the first openly gay athlete to be endorsed by Nike.

Despite all this, Griner had a second job, and that was why she had flown to Russia to play for EuroLeague team UMMC Ekaterinburg, where she had worked since 2014 during the U.S. off-season.

Roughly half of WNBA players compete overseas in the off-season. For most, it’s a way to augment their domestic income: WNBA players receive roughly five times more in Russia than they do in the U.S.

Following Russia’s invasion of Ukraine on Feb. 24, the EuroLeague suspended all Russian teams and U.S. and WNBA officials began calling players out of the country.

But it was too late for Griner, who is believed to have entered Russia one week earlier, though the timing remains unclear.

The Russian Federal Customs Service said in a press release that a sniffer dog had led authorities to search the carry-on luggage of an American basketball player, and that it had found vape cartridges containing hashish oil. A state-owned Russian news agency, Tass, identified the player as Griner.

Russian authorities only confirmed her detention the third week of March, though they disclosed she was stopped at the airport in February. Where she is being held, and under what circumstances, is not publicly known.

U.S. authorities and representatives for Griner have been mostly silent except to say they are working to bring her home.

A state department spokesperson confirmed the player’s detention, telling the BBC they were “aware of and closely engaged on this case.”

While there is no indication that Griner’s arrest was connected to the invasion of Ukraine, some U.S. officials have indicated strained U.S.-Russian relations may jeopardize her return.

“We don’t want Ms. Griner to become a pawn in the political battle that’s being waged throughout the world right now,” said U.S. congressman John Garamendi, a member of the House of Representatives’ armed services committee.

“The war in Ukraine has essentially severed diplomatic ties between the U.S. and Russia,” Garamendi said. “That is going to exacerbate this issue.”

Russia has so far blocked consular access to Griner for the U.S. embassy, he said. She could face up to 10 years in prison if convicted on drug charges.

The U.S. embassy in Russia did not respond to a request for comment.

BIG Media
Our focus is on facts, accurate data, and logical interpretation. Our only agenda is the truth.
Previous articleSelfishness, hypocrisy, the golden rule, and hope
Next articleHigher cigarette taxes reduce child deaths, study indicates