Climate change and energy: context for the great debate 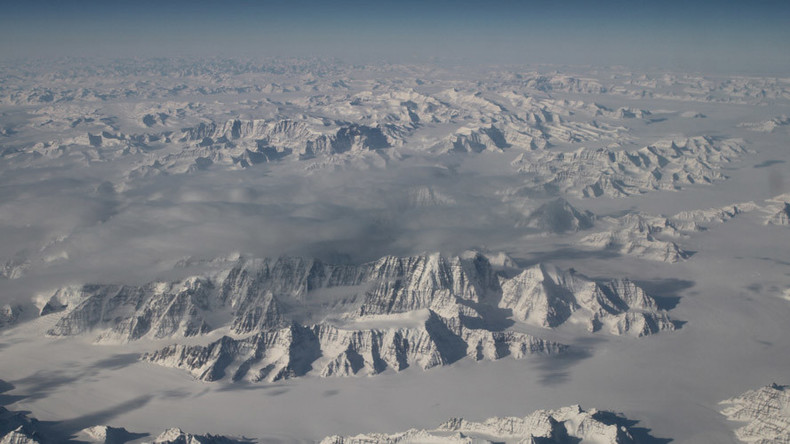 Fifteen thousand years ago, humans walked across the Bering Strait from Asia to North America. How, you ask, did humans walk across an 80-metre-deep body of water? It was not a biblical miracle; it was because the strait was dry. Sea level was more than 100 metres lower than it is today. All that water was locked in the ice that covered much of the planet at the time.[1]

What was to become Calgary, Alberta, a city of roughly 1.3 million people, was covered by 1.5 kilometres of ice. Three hundred km north of Calgary – future site of the city of Edmonton – was under more than 3km of ice. Obviously, the residents of both cities now enjoy an ice-free existence, with the exception of the seasonal inconvenience that is the Canadian winter. The climate has been warming relatively steadily since the last ice age (approximately 20,000 years ago), and humans have adapted. Indeed, Earth’s climate has been changing since the beginning of Earth (Figure 1).[2]

The maximum thickness of the North American Laurentide ice sheet (Figure 2) around 20,000 years ago was 4km. Only the tallest peaks of the Rocky Mountains protruded above the ice. For the most part, all of it had melted by 8,000 to 6,000 years ago.[3] A back-of-the-envelope calculation shows that for this to happen, melting had to occur at an average rate of 29-33 centimetres per year. (BIG Media article Funeral for a glacier compares the shrinking of a modern-day Icelandic glacier to this natural rate and finds a similar number.) 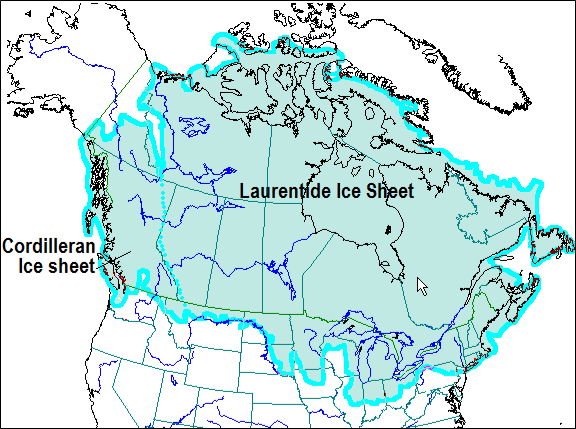 There is significant geological evidence for the presence and effects of ice sheets that huge. Gigantic boulders called “erratics” were carried by glacial forces and dropped when those glaciers melted sufficiently to lose their muscle (Figure 3). A rocky outcrop in the centre of Victoria, B.C., a city on Vancouver Island that now benefits from a very mild coastal climate, shows gouges and grooves that resulted from a massive ice sheet flowing under its own weight, dragging rocks and debris over the bedrock below (Figure 4). The catastrophic release of all the water in a glacial lake when an ice dam gave way is documented in multiple locations in the rock record, including the site of the Great Spokane Flood described by BIG Media contributor Oliver Kuhn. 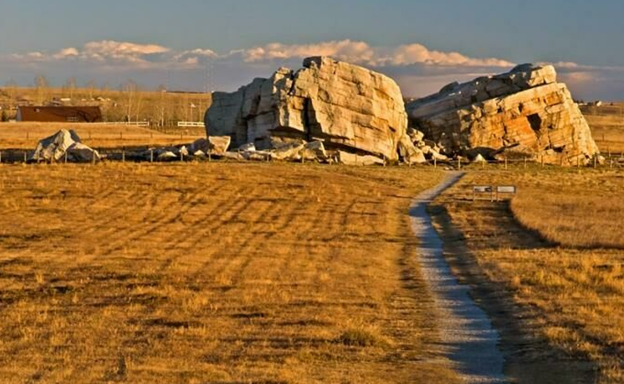 Figure 3: The erratic near Okotoks, Alberta, which has been traced to an original home near Jasper, Alberta. 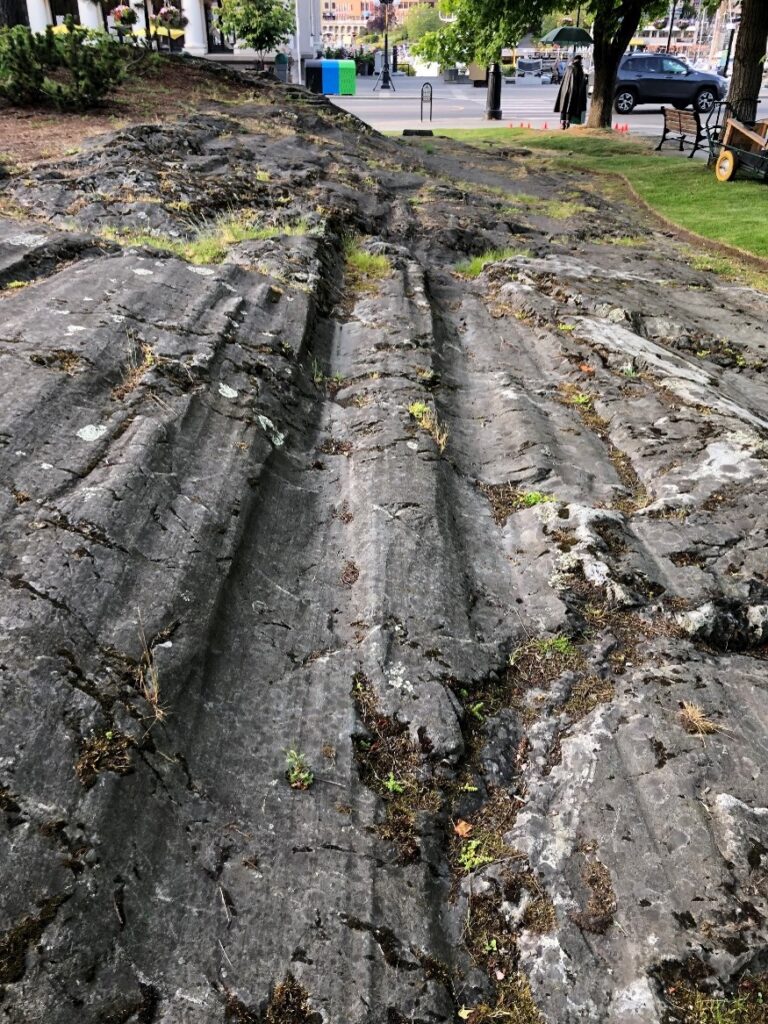 What might those early humans have done as soon as they arrived in the region that would, much later, be known as Alaska? They probably gathered wood and made a fire, because they wanted to warm up and cook some food. Energy is necessary for life. Without increasing amounts of it, we would not be living a modern life that includes everything from comfortable temperatures in our houses, to efficient transportation, to the internet and devices to access it.

Our use of energy has evolved to include a mix of energy sources: fossil fuels (coal, oil, natural gas), nuclear, and renewables (wind, solar, geothermal, hydro, biomass, biofuels[4]). All of them, directly or indirectly, to varying degrees, cause emissions of CO2 and other greenhouse gases (GHGs), which can affect the composition of elements in the atmosphere and contribute to the factors affecting changes in climate.

From the beginning of the industrial revolution in the mid-1800s, coal has been the dominant energy source for heat and electricity. With the rise of the internal combustion engine, the contribution from oil grew quickly, overtaking coal in recent years (Figure 5).[5] Coal is plentiful, cheap, and readily transported to wherever it is needed – little lumps of concentrated energy stored indefinitely for release on demand. 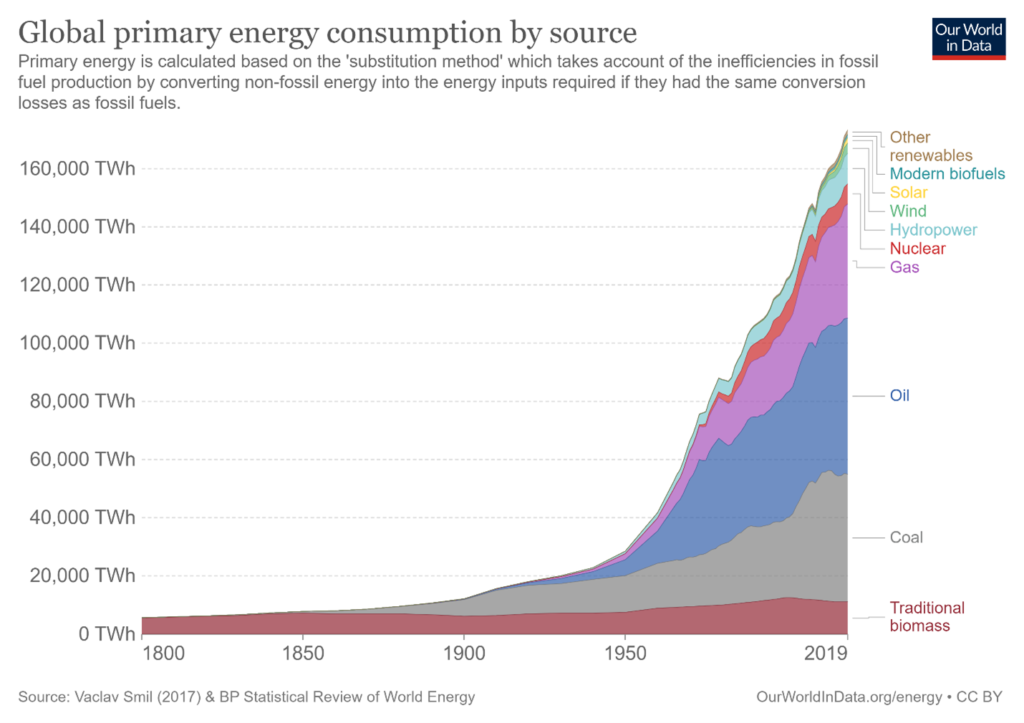 Figure 6 shows the proportional mix of energy sources globally since 1965.[6] Total energy use has increased steadily with sharp drops during recent periods of world-wide economically disruptive events (2009 and 2020). While modern renewables (wind and solar) have grown in proportion to the total, in 2019 (a “normal” year), they still satisfied only 3.3% of global energy demand.

Renewables have been encouraged and promoted by groups seeking to reduce emissions from fossil fuels, but they are not without their challenges. Unlike coal, they are not easily transported or stored for use at some convenient time after collection. In fact, jurisdictions such as Texas and California have experienced problems when demand exceeds the natural supply of these energy sources (Power struggle – data analysis puts Texas energy debacle into perspective). 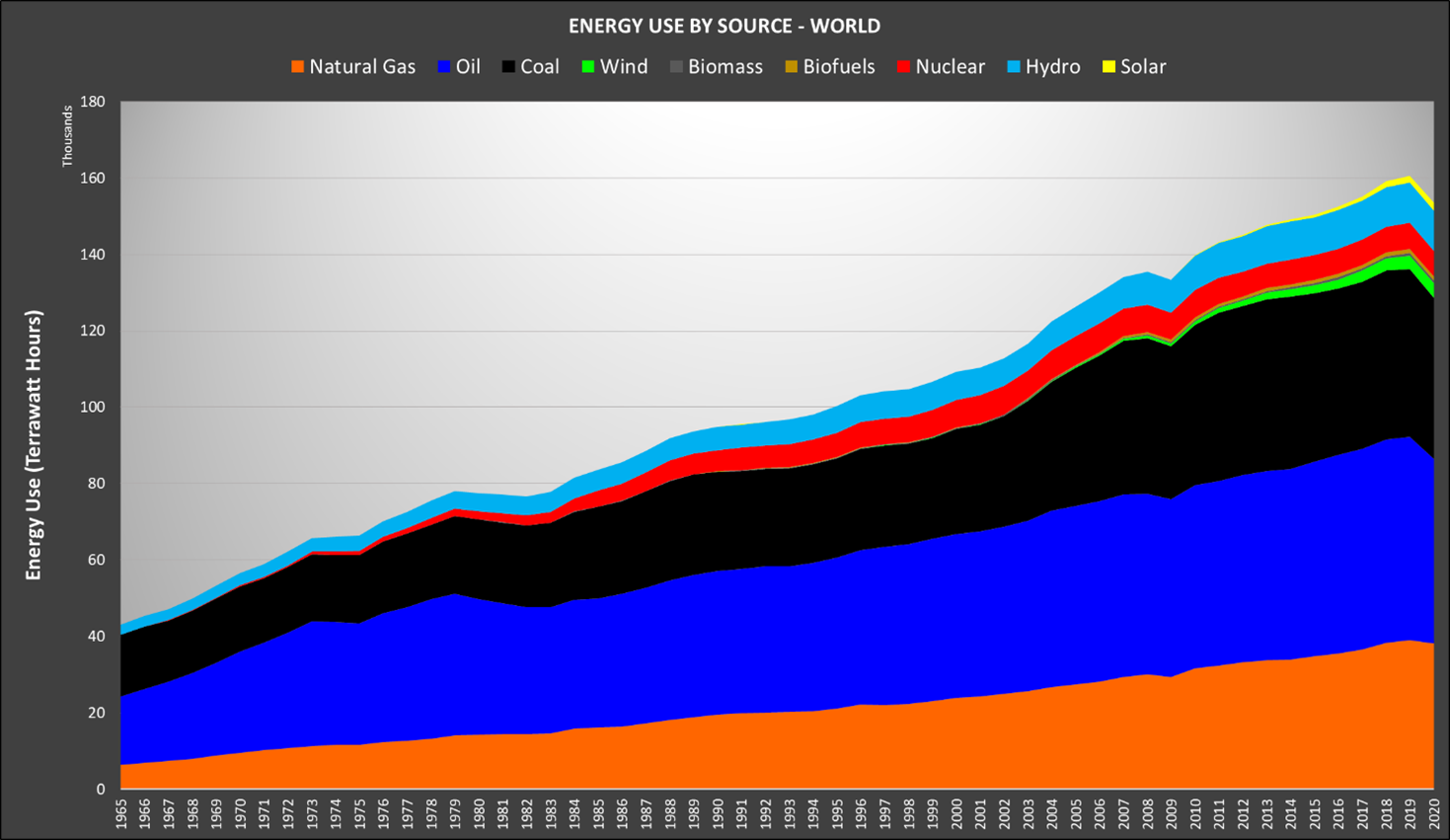 Energy-use trends vary by region and particularly by relative economic development. Figure 7 shows the total energy use for a selection of developed countries in the “first world” (U.S., U.K., Canada, Australia, and Germany), compared with a selection of developing regions (China, India, Mexico, and Africa). 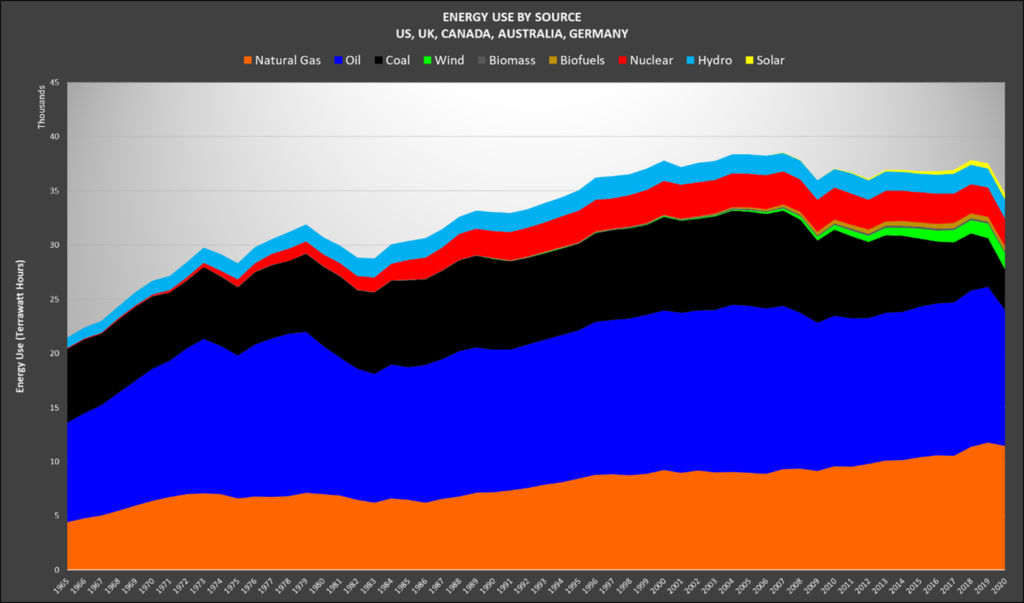 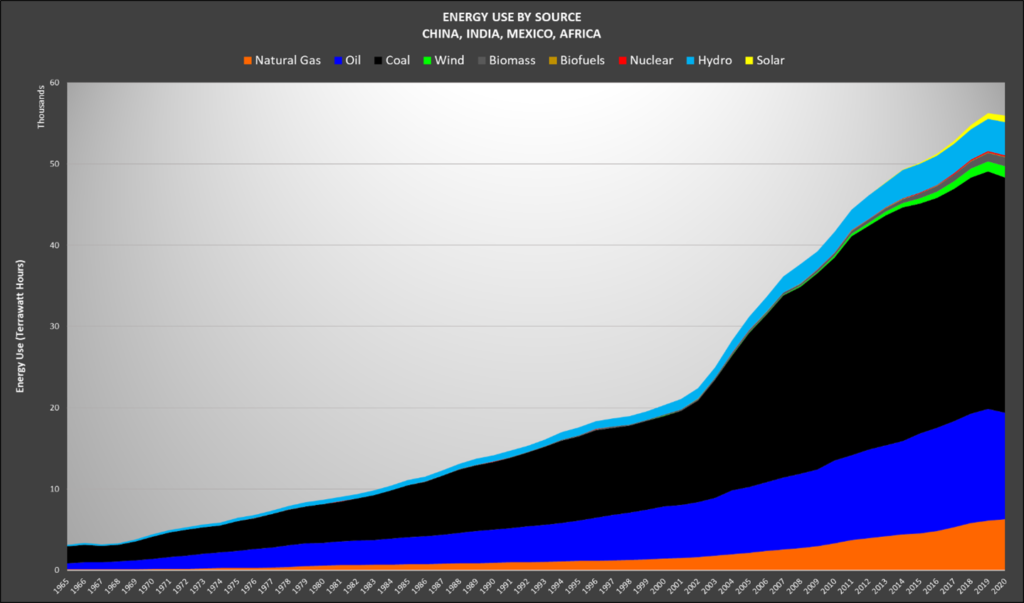 These charts show striking differences. Overall energy use in the first world has been relatively constant over the past 30 years and shows a slight decreasing trend since 2007. In contrast, developing regions’ total energy use has nearly quadrupled in the same time frame with the growth rate steepening significantly since the start of the century and total energy use surpassing that of the selected first-world countries about 10 years ago. Scaling these charts by population (Figure 8) amplifies these observations: per capita first-world energy consumption has dropped by approximately 15% from 2000 to 2019 – prior to the 2020 “anomaly” – while the developing world has increased its consumption by 113%. 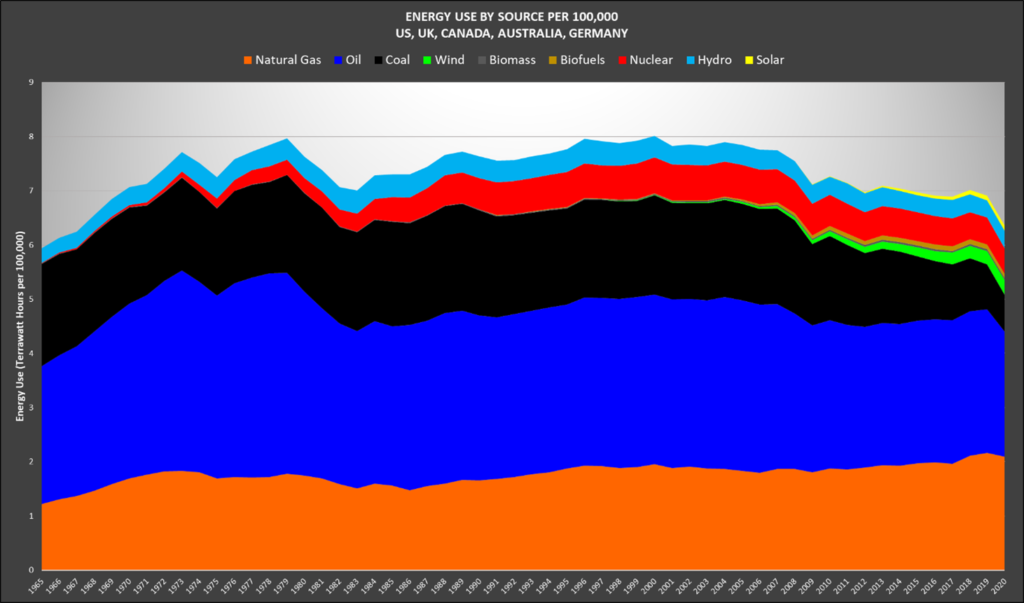 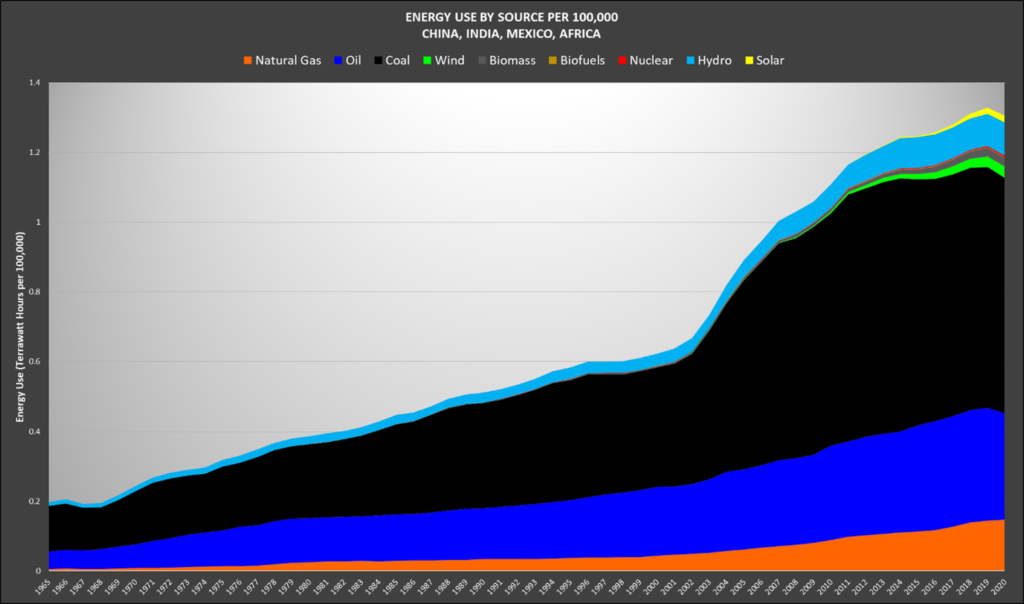 Before those of us in the first world are too quick to congratulate ourselves, we should notice that, relating these energy trends on the same scale as shown in Figure 9, the per capita energy use in the developing world is still a fraction of what people in the developed world use. Energy use correlates to GDP, or standard of living. For the standard of living to be equitable throughout the world, energy use needs to be similar. At some point, the trajectories of these two curves will meet, ideally at an optimal balance of energy sources, energy efficiency, and sustainability. 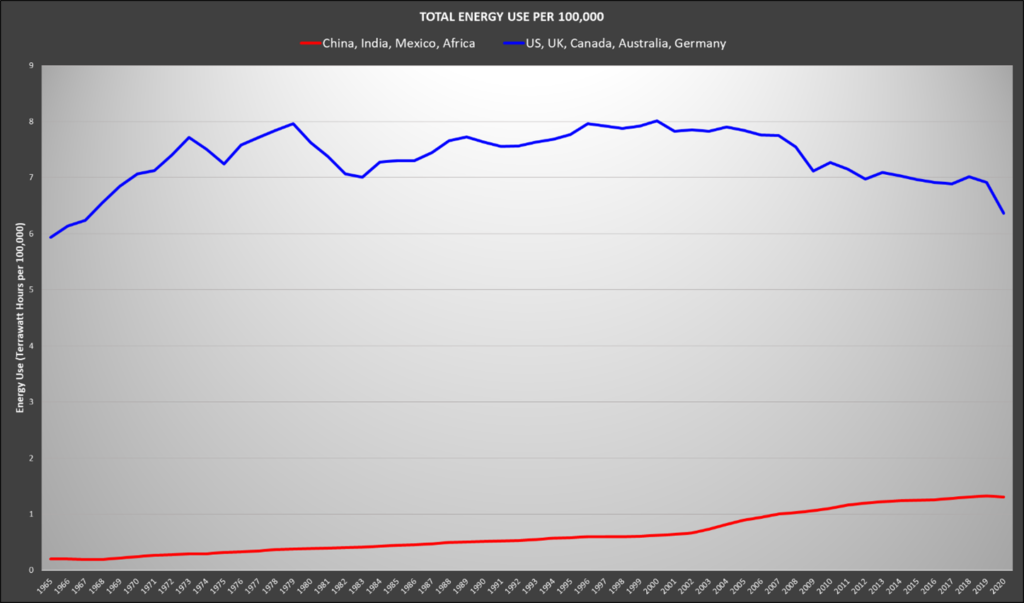 Given the realities of constant natural climate change and the adaptability and resourcefulness of the human race, it makes sense to work toward practical energy solutions that incorporate the very real economic disparities and innate aspirations of all societies.

[3] Ullman, D., The retreat chronology of the Laurentide Ice Sheet during the last 10,000 years and implications for deglacial sea-level rise.

[4] “Biomass” refers to traditional energy sources burned for fuel, such as wood, charcoal, plant waste and animal waste. “Biofuels” are modern biological sources such as plant-based ethanol and plant and animal-sourced fats for biodiesel, which may or may not be blended with petroleum-based products. Biofuels Explained

Laurie Weston
Laurie Weston is a co-founder and scientific strategist for BIG Media, with a Bachelor of Science degree with honours in Physics and Astronomy from the University of Victoria in Canada. Laurie has more than 35 years of experience as a geophysicist in the oil and gas industry. She is president of Sound QI Solutions Ltd., a data analysis software and services company she founded in 2007.
Previous articleCrypto-currency cash machines ordered closed
Next articleIran fires missiles at northern Iraqi city