Funeral for a glacier

The Icelandic glacier by the name of Okjökull – affectionately known as “Ok” – was declared dead in August of 2019. Allegedly killed by anthropogenic (human-caused) climate change, it was mourned in a ceremony attended by grieving scientists, sombre politicians and artists, and anxious children. A pair of Texan anthropologists memorialized the glacier-that-was in a short film[1], and famous local author Andri Snær Magnason wrote a “letter to the future” – Ok’s epitaph – on the plaque marking the spot where it once stood: “Ok is the first Icelandic glacier to lose its status as a glacier. In the next 200 years, all our glaciers are expected to follow in the same path. This monument is to acknowledge that we know what is happening and what needs to be done. Only you know if we did it. August 2019. 415ppm CO2.”

What does it mean to lose one’s status as a glacier? And is Okjökull really the first in Iceland to qualify for this inauspicious distinction?

Ice is fluid and glaciers flow under their own weight. When they become too thin, they can no longer move. According to geologist/glaciologist Oddur Sigurðsson, when a glacier cannot move, it is technically “dead ice” and is no longer known as a glacier.[2] Have there been others that have passed without fanfare? We need to turn to the rocks to find out.

The rock and fossil record gives us evidence of ancient climates and presence or absence of ice. Study of this record in Iceland shows that in the past 2-3 million years, Iceland has been completely covered and then uncovered by ice at least 12 times.[3] The last glacial maximum (LGM), around 20,000 years ago, was the most recent complete coverage with a maximum ice thickness of more than 2 kilometres.[4] It appears, therefore, that Okjökull was not the first; there have obviously been more than a few dead glaciers over the years.

The human race has been found guilty of Ok’s murder. Did we get a fair trial? Were all the facts presented and weighed by an impartial judge? The engraving of the incriminating atmospheric concentration of CO2 seems to be the smoking gun.

As we have seen, Mother Nature is quite effective at melting and growing glaciers all by herself, well before humans began contributing to the carbon dioxide in the atmosphere. We can do some simple math to estimate the natural rates at which glacier ice melts. The chart below shows a straight line connecting the maximum thickness of the Laurentide ice sheet, which covered much of North America 20,000 years ago, to the point when all that ice had melted on the plains, between 8,000 and 6,000 years ago.[5] The slope of that line (using the 6,000-year endpoint) is the average melting rate: 28.5 centimetres/year. That doesn’t seem like much, but over 100 years, it adds up to 28.5 metres.

This is a very simplistic average line based purely on the end points. In reality, it is not a straight line. There would have been periods of faster retreat, slower retreat, status quo, and even growth while the overall trend was diminishing. There is also uncertainty in the numbers. If the end of the melting was 8,000 years ago, then the average melt rate becomes 33 cm/year. Testing reasonable variations in the timing and magnitude of the maximum thickness and the timing of disappearance, a natural average melt rate could range between 14 and 42 cm/year. 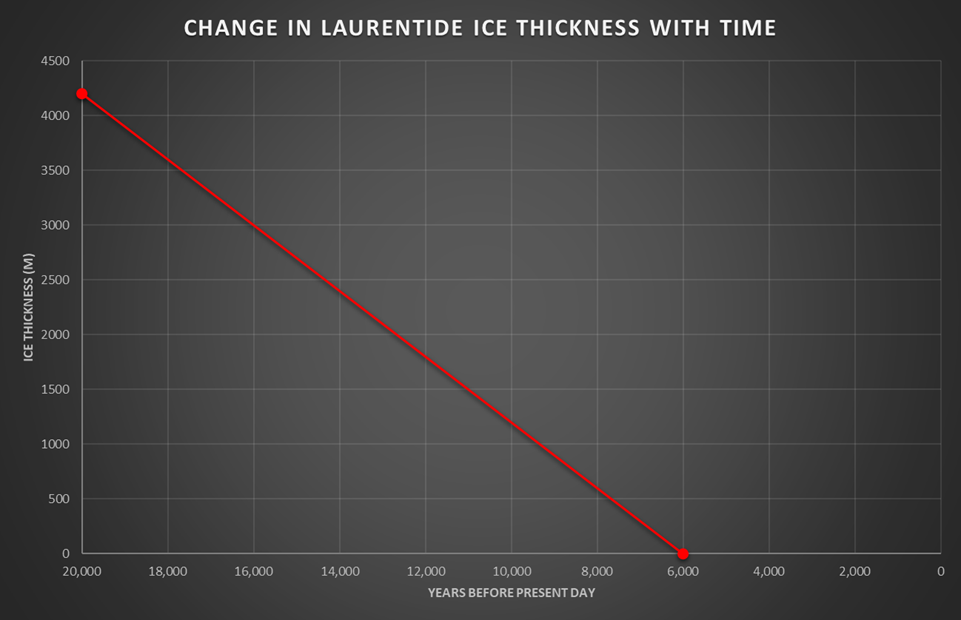 Okjökull was observed to be 50m thick in 1901 and only 15m thick in 2019 when it was declared dead. That is an average melting rate of 29.6 cm/year, which is right in the middle of the natural range described above. Based on this simple exercise, it seems that the jury might still be out on the “human-caused” verdict. Could Ok have died a natural death?

[5] Ullman, D., The retreat chronology of the Laurentide Ice Sheet during the last 10,000 years and implications for deglacial sea-level rise.

Laurie Weston
Laurie Weston is a co-founder and scientific strategist for BIG Media, with a Bachelor of Science degree with honours in Physics and Astronomy from the University of Victoria in Canada. Laurie has more than 35 years of experience as a geophysicist in the oil and gas industry. She is president of Sound QI Solutions Ltd., a data analysis software and services company she founded in 2007.
Previous articleResearchers set record for coldest recorded temperature— 38 picokelvins —narrowly beating your dining room when vaccination was brought up during Thanksgiving meal
Next articleCalifornia university students renew faith in future of media