Sea level is rising; should we be worried? 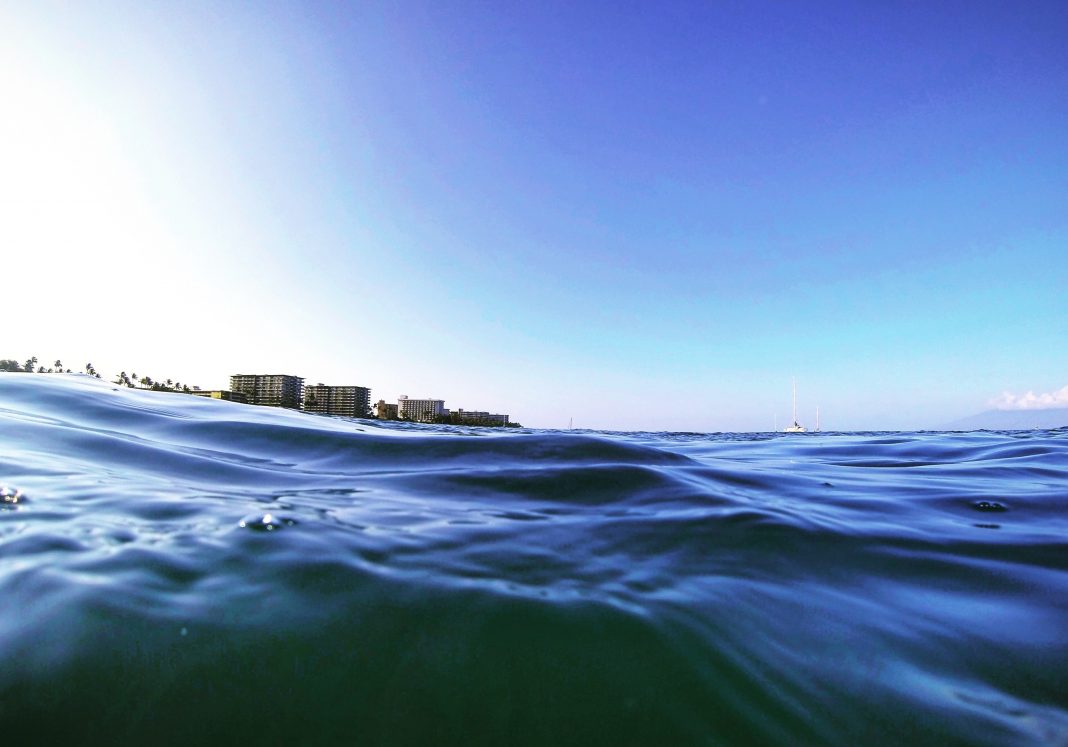 One of the concerns associated with climate warming is rising sea level. The Intergovernmental Panel on Climate Change (IPCC) (2019) estimates that global mean sea level will rise 30 to 110 centimetres (cm) between 2005 and 2100.

Media reports have regularly blamed climate change for rising sea levels threatening the homes and livelihoods of people along the Gulf of Mexico coastline in Louisiana[1] and in Jakarta, the capital city of Indonesia[2]. We have seen many predictions that low-lying islands will be submerged, forcing their inhabitants to become “climate refugees”.

What are the real threats posed by rising sea levels, and is human-driven climate change a driving factor?

Studies of the sedimentary rock record around the world enable geologists to reconstruct global sea levels throughout geological history (Figure 1). Sea level was 250-400 metres (m) higher than today throughout much of Earth’s history. Many factors control sea level, including long-term geological events that built mountain chains such as the Rockies and Himalayas on land and huge subsea mountain ranges including the mid-Atlantic ridge, on which Iceland sits today.

A primary controller is the amount of water locked up in glaciers and ice sheets on land. Relatively low global sea levels, at the beginning of Cambrian time (542 million years ago), at the Permian-Triassic boundary (250 million years ago), and in very recent times are associated with extensive ice sheets on land. As well, water above 4C expands as it warms, increasing the volume of seawater and causing sea level to rise.

Today, there are massive ice sheets in Antarctica and Greenland, and smaller glaciers in mountainous areas around the world. During the peak of the last glacial maximum (ice age) 21,000 years ago, ice sheets covered huge areas of North America, Europe and Asia, and global sea level was more than 120m lower than today (Figure 2).  Measurements from around the world show rapid sea level rise with melting of the ice sheets until about 6,000 year ago, and gradual but steady rise since then as the remaining glaciers continue to melt. 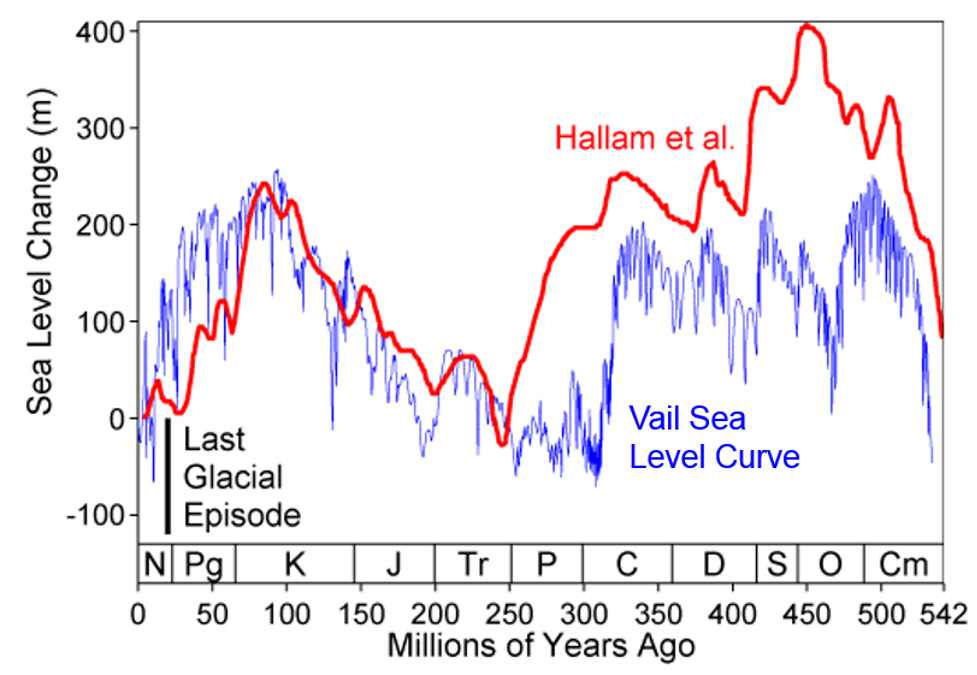 In the shorter term – during our lifetimes and our children’s’ lifetimes – what will happen to sea level, and what does it mean for humanity and ecosystems?

The IPCC (2019) modelled a range of potential sea level changes between today and 2300 based on a range of assumptions about climate change and how it might affect net melting of land-based ice sheets (Figure 3). These models show a range of 30-110 cm of rise by 2100 – a rate of 0.32-1.2 cm/yr. At the lower end, this is only a slight acceleration from natural sea level rise over the past several thousand years, while the upper end of about a metre of rise by 2100 references the IPCC RCP8.5 scenario, which assumes very little action on reducing greenhouse gas (GHG) emissions for the next 80 years. 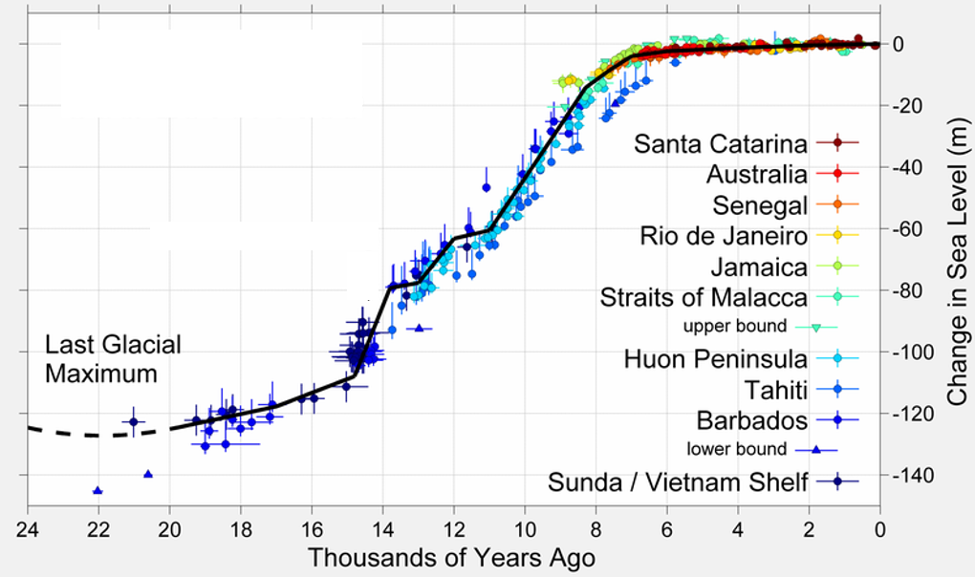 Should we be concerned about these increases?

A metre of sea level rise at the upper end may seem small in historical context, but there are many people living close to or below present-day sea level, and small rises can be magnified during large storms when water is driven ashore by winds and atmospheric pressure changes.  And then there are those reports of sea level rise endangering coastal populations.

First, humanity has been living near the lower end of the projected range of sea level rise throughout recorded history. Whether we make changes to influence climate change or not, sea level will continue to rise as it has throughout history. The problem is not dealing with 30-110 cm of sea level rise versus no rise; the problem is dealing with 30-110 cm versus having to deal with something less, perhaps 15-20 cm.

Second, sea level measured at any particular location is a product of both global sea level change and local drivers. Dramatic changes in apparent sea level in places such as Louisiana and Jakarta are driven almost entirely by local factors. Jakarta has pumped water from underground aquifers for decades, causing the land to sink. Similarly, many coastal communities in Louisiana are built on sediments of the Mississippi Delta. All sediments naturally compact with age, as the weight of overlying materials squeeze out the contained water and compress soft muds into denser material occupying less space. Therefore, much of coastal Louisiana is sinking naturally beneath the ocean, and there is nothing we can do to alter that. The same processes are causing Venice to sink, intensifying recent highly publicized floods.

Figure 4 is a photo taken on a geological field trip illustrating deltaic subsidence. At Sergeant Beach on the Texas Gulf Coast, subsidence of the Brazos River delta has caused formerly settled land, including houses and roadways, to sink below sea level. Waves and storms have eroded and undercut the roadway. 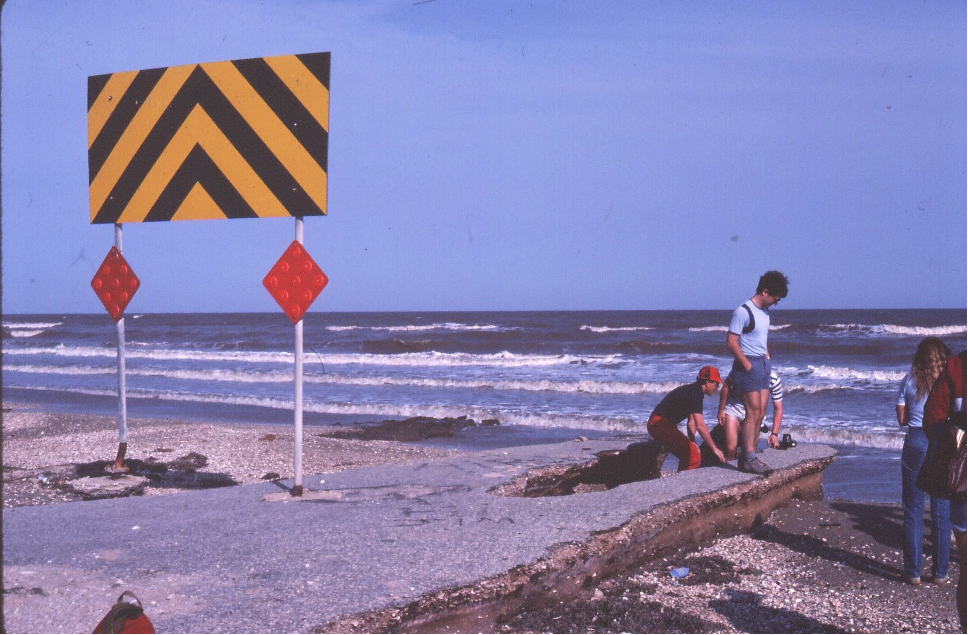 There are actually places where the land is naturally rising because of “isostatic rebound”. The land is bouncing back after being depressed for thousands of years by kilometres-thick ice sheets, so local sea level is actually falling. We rarely hear about this because the largest effects are in northern, lightly populated areas where glaciation was most extreme, as around Hudson Bay.

Third, many supposedly threatened islands such as the Maldives, Tuvalu and Kiribati have not experienced land-area loss although global sea level has been rising continuously. Duvat (2019) demonstrated in a study of 709 islands over the past decades to century that 73.1% showed stable land area, 15.5% actually grew, and only 11.4% lost land area. The smallest islands (less than 5 hectares) experienced most variability while larger inhabited islands were relatively stable.

Fourth, even the most extreme forecast global sea level rise is a slow, predictable process. We know that anything built near sea level today must be designed for higher sea levels in the future. In fact, humanity has adapted to rising sea levels and to living below sea level for centuries. Much of the Netherlands lies below sea level, and thrives in environments protected by dikes. Even though New Orleans is constantly subsiding, dikes and levees protect it from both the sea and the Mississippi River. There are similar protections in place for much of South Vietnam and for parts of London, England.

Is it being accelerated by climate change? Very likely.

Does that acceleration pose large threats to humanity? Perhaps in a handful of local regions, but we can continue our successful long-term adaptations to rising sea level while working to minimize human impact and addressing more immediate challenges.

Brad Hayes
Brad Hayes has a PhD in geology from the University of Alberta and is president of Petrel Robertson Consulting Ltd., a geoscience consulting firm addressing technical and strategic issues around oil and gas development, water resource management, helium exploration, geothermal energy, and carbon sequestration. He is an adjunct professor in the University of Alberta Department of Earth and Atmospheric Sciences.
Previous articleU.S. Department of Energy offers quantum computing testbed to public
Next articleMicrogravity on interplanetary mission could leave you spaced out