Will renewable energy costs continue to drop – and will this make electricity cheaper? 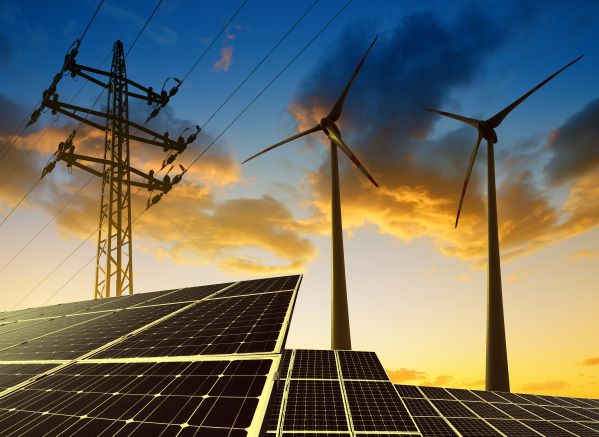 I have read many articles claiming that costs of wind and solar generation are lower than alternatives, and that rapidly declining costs seen in the past will continue unabated in the future, reducing the cost of electricity for consumers.

Is that all true? Have the costs of generating electricity from wind and solar generation actually declined in recent years? Will they decline rapidly in the future? And will such reductions, if realized, make electricity cheaper for consumers?

First, let’s understand the questions a bit better. What do we actually mean by the cost, and how do we calculate it? As is the case with most analysis, it depends on the conditions you lay out and the assumptions you make.

The cost of extracting any resource depends on the concentration or density of the resource. There is gold everywhere in the world, including dissolved in seawater, but we mine/extract it only where there is a sufficient concentration. Two grams per tonne of ore is good for gold because of its very high intrinsic value. Two grams of iron per tonne of ore doesn’t cut it, because there is not sufficient value in iron at that level.

The resource-density principle applies to wind and solar resources – you cannot extract their energy if the resource is not present in sufficient quantities to pay the bills. 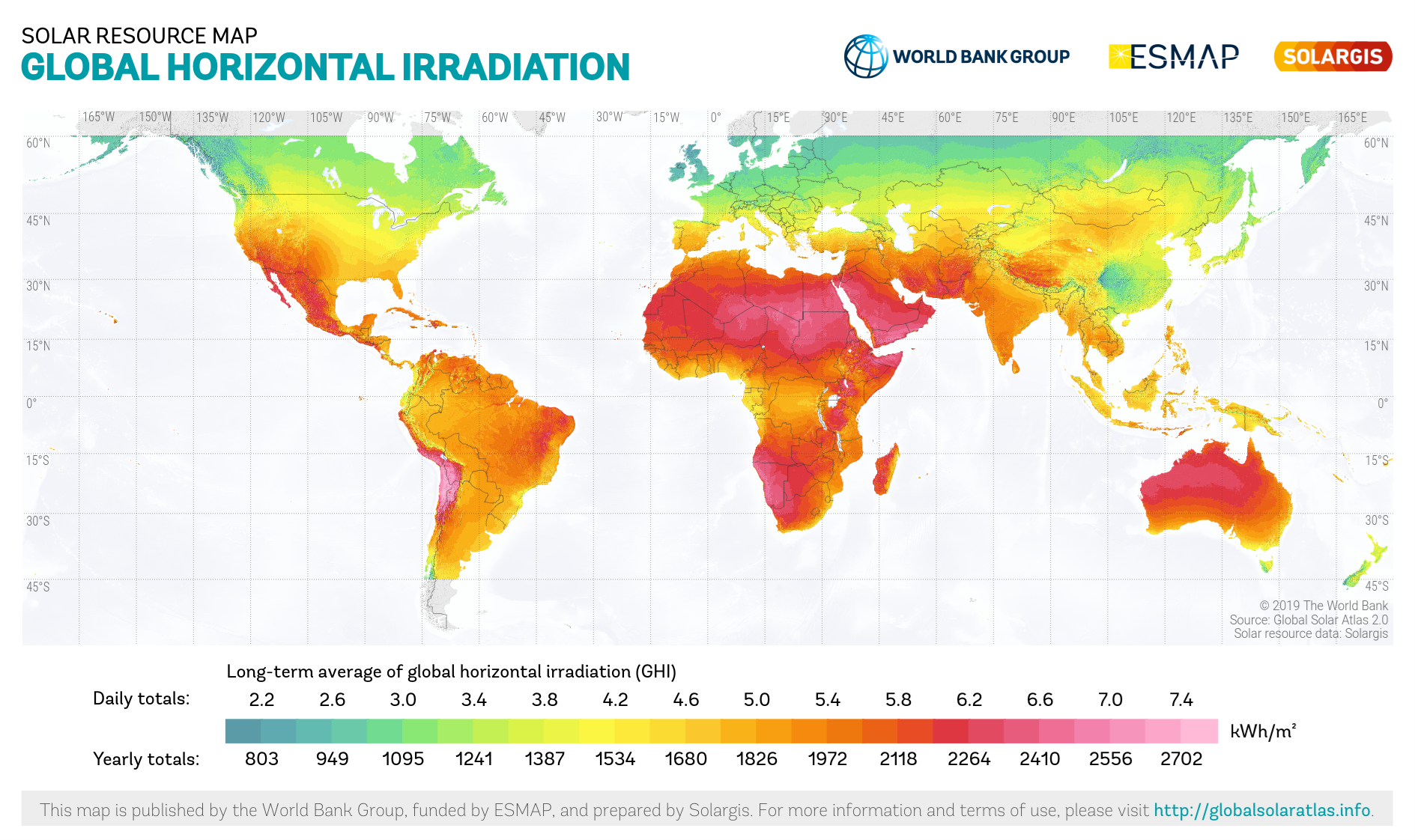 In this illustration, the southwestern U.S. and Mexico, northern Africa and the Middle East, parts of southeastern Asia, and Australia all have good resource density, and solar can often generate electricity at relatively low cost in these areas. Even southern Europe is prospective, because although the GHI values are lower, there are so many people living there that a lot of generation capacity can be built very close to market. The Gobi Desert and the High Andes have fantastic solar potential – but few people live there. For those of us living in most of Canada, northern Europe, or Russia, solar is a non-starter because the resource density is so low that you would build a lot of expensive infrastructure for little return.

The global wind speed map (Figure 2) tells a similar story for wind, but in different places. 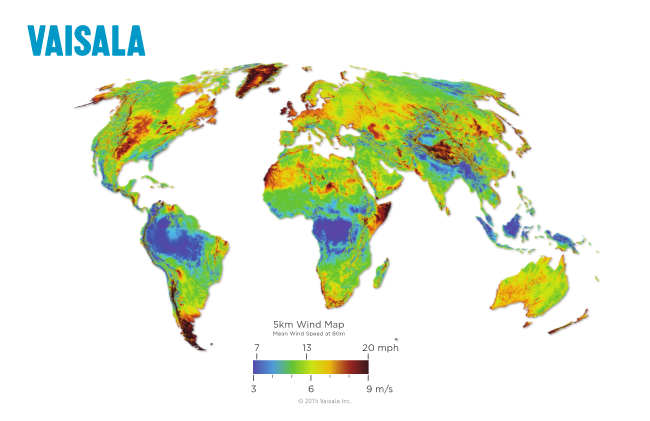 Wind energy is abundant and can be relatively inexpensive in the middle of North America, around the North Sea, and on the western and eastern coasts of Africa.

Some spots might work well for cheap wind power in parts of Europe, South Africa, and Australia, but the huge wind resources in Greenland, southern Chile, and the Gobi Desert are not in position to power many lives.

We must realize that the costs of wind and solar energy vary widely across the globe because the resources are rich in some places, and poor in others. So, when someone talks about wind or solar being “cheap”, they are assuming high resource density – meaning only in select places.

A second thing about measuring cost – what value do you place on availability? As we all know, you generate solar power only when the sun shines and wind power when the wind blows. Looking at Alberta’s electricity supply as I write (mid-afternoon, October 22), solar is generating 83 megawatts of electricity (from a total installed capacity of 1088 MW), and wind is generating 1171 MW (capacity 2780 MW). Checking five minutes later, the values are 70 MW and 1150 MW, respectively (Current Supply Demand Report). While each megawatt-hour of solar and wind may be cheap compared to other sources (depending on the market mechanism), you can’t buy much of either at a time when people in the province are demanding 9677 MW. Fortunately, Alberta has abundant natural gas-fired capacity that can be varied quickly to compensate for the unpredictable wind and solar output.

So “cheap” wind and solar does not do us any good when it is not being utilized.

Let’s look at historical costs for generating electricity from wind and solar. There is little argument that capital costs over the past 12-15 years have fallen dramatically as technology has improved for all types of installations (Figure 3).

Solar and wind facility operators have been able to bid lower and lower prices to build new capacity, in some cases lower prices than alternative forms of electricity generation. But the rate of cost reduction has obviously levelled off in recent years as procedures and processes are optimized, and as physical limits for efficiency of energy capture are reached.

What does that mean for future costs? There are two really important factors to consider – storage/intermittency and supply chains.

I addressed intermittency with an example above – the 16% drop in solar generation in a five-minute period. That is tolerable for an electrical grid dominated by gas generation, where intermittency of a small component is readily compensated. But what if solar were a large part of the Alberta grid – say, 40-50%? Rapid fluctuations during the day, and zero output at night would need a lot of expensive energy storage, or reliable backup in the form of gas-fired generation, to meet demand every minute of the day – which is the standard electrical grids must deliver. Even if solar can sell to the grid at a cheap price – say $0.03/kW‑h – we must add in the price of building and maintaining storage and backup to actually have a functional electrical system.

Therefore, if we are going to have electrical grids powered largely by intermittent renewables in the future, we have to factor in these large additional costs on top of the actual price of electrical generation by wind or solar. That adds up to far higher prices for the consumer than the price the grid operator pays to the solar or wind generator.

On top of these short-term concerns, building the huge amount of new generation and energy storage infrastructure that would be required to shift the world significantly away from fossil fuels would require immense new mineral supplies. Figure 4 shows that wind generators require immense quantities of copper and zinc, but also far more rare earths than other energy sources.

Solar panels also require immense quantities of high-purity polysilicon. Prices of many of these commodities are skyrocketing because of supply constraints. Lithium prices, for example, are up by a factor of 10 in the past few years. For many critical minerals, it will take well over a decade to prospect for and develop new supply chains – a process that is energy-intensive and potentially environmentally damaging. There are serious doubts that we can ever develop quantities of some of these materials sufficient to meet projected needs.

Will we see a future with declining or at least stable electricity prices, led by declining costs of solar and wind generation? That is a difficult argument to make, because:

A parting thought – Texas and California have made the news a lot in recent years because of electrical grid issues. Both have high renewables penetration, but California’s retail electricity is among the most expensive (18.0 cents/kW-h), while Texas boasts one of the lower rates (8.36 cents/kW-h) (State Electricity Profiles). There is a lot to consider as we strive for sustainable and reliable energy development practices.

Brad Hayes
Brad Hayes has a PhD in geology from the University of Alberta and is president of Petrel Robertson Consulting Ltd., a geoscience consulting firm addressing technical and strategic issues around oil and gas development, water resource management, helium exploration, geothermal energy, and carbon sequestration. He is an adjunct professor in the University of Alberta Department of Earth and Atmospheric Sciences.
Previous articleAvoiding extinction – some large Asian animals thriving near humans
Next article‘World’s dirtiest man’ dies at age 94