Reductio ad absurdum and the war of principles over abortion 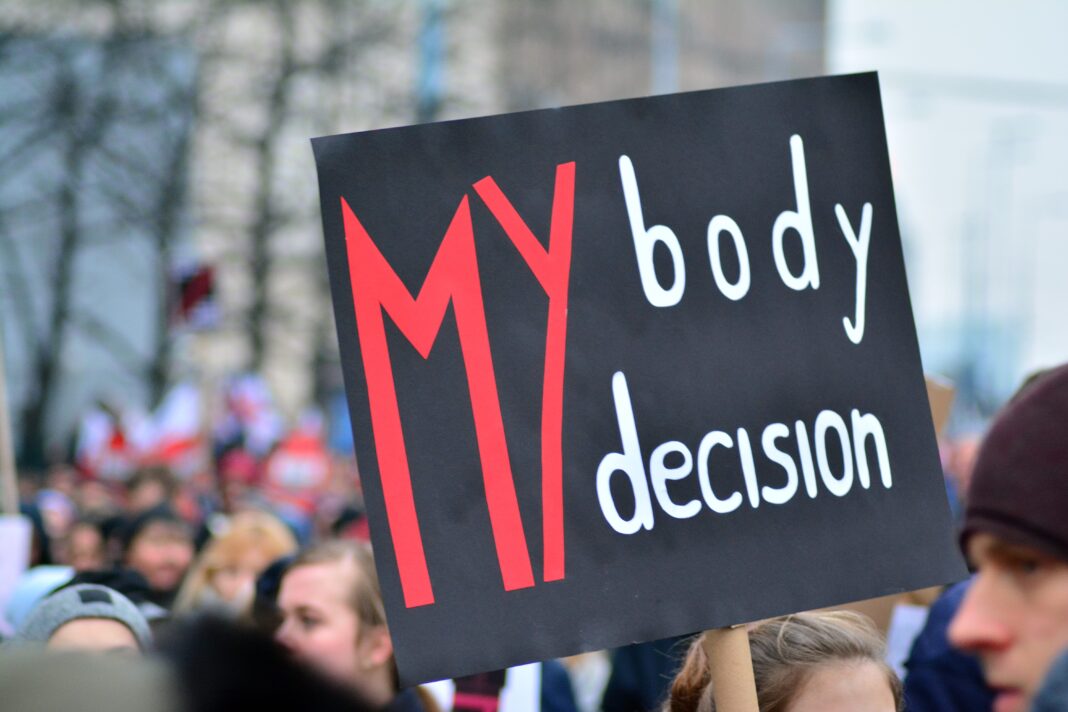 On June 24, the U.S. Supreme Court overturned the Roe v Wade ruling, which had determined in 1973 that the Constitution of the United States generally protects the right to choose to have an abortion.

It is speculated that about one-half of the U.S. states will legislate new bans or restrictions on abortion.[1]This decision is of interest throughout the world, despite the fact that law in the United States only holds jurisdiction within that country. Canada has no laws on abortion, previous legislation being struck down in 1988 as it was deemed to violate a woman’s right to life liberty and the security of person. Abortion in Canada has since this time been treated as a standard medical procedure.[2]However, the fact that abortion is not a constitutional right in Canada, but rather depends on the interpretation of other rights, makes the U.S. ruling relevant.[3]

There could hardly be a more personal, profound, or controversial issue than abortion. It directly involves the potential life of an infant and the rights and freedoms of the pregnant woman. The issue is so difficult because it pits two principles at war with each other: the life of the unborn child versus the freedom and autonomy of the mother. The new Supreme Court decision has heated this issue, but the battle could escalate to an even darker war if the legal right to contraception is also threatened – which could be the case in some parts of the U.S.[4]

Speculation over the fate of birth control is undoubtedly frightening to many in the U.S., particularly the less affluent, as 75% of abortions are among those of lower income and below the poverty line.[5]Taking the principle of protection of the fetus to contraceptives exposes the arguments to a logical test against absurdity, and brings the debate into clearer focus.

Let us examine arguments around this war of principles, our consistency or inconsistency in applying these principles, and conclude with a look at the endpoint of the debate.

The principles and rights of individuals are widely codified. The United States’ 14th Amendment addresses such rights back in 1868, in a provision stating that, “Nor shall any stat deprive any person of life, liberty, or property, without due process of law.”[6]The first international agreement on such rights was the American Declaration of Rights and Duties of Man in 1948, which stated that, “Every human being has the right to life, liberty, and the security of his person.” Canada, the U. S., and 23 other nations are signatories to this language that is similar in content to the 14th Amendment.[7]The United Nations followed in the same year with a similar declaration, and Canada codified its own charter in 1982. A summary graphic shows the similarity in language between these instruments.[8][9]

It is a sobering observation that the abortion debate puts the wellbeing – and, arguably, the rights – of the mother against those of the unborn child. 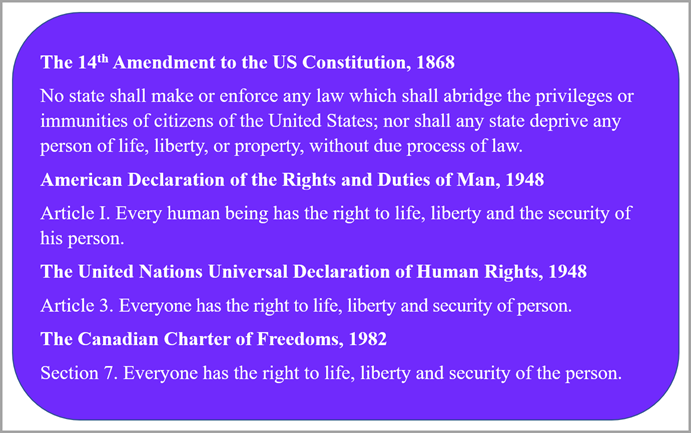 While the original Roe v Wade decision depends heavily on a right to privacy rather than the woman’s right to life an liberty, recent international law focuses more clearly on these rights as discussed in the previous section.[14]This issue is ultimately a matter of determining the primacy of the pregnant woman’s rights over that of the unborn child. And whether the state’s interest can and should supersede those of the woman who is bearing the ultimate physical, moral, and emotional burden of the argument.[15]

As discussed in this recent article Selfishness, hypocrisy, the golden rule, and hope, human beings have a psychological tendency to apply to themselves greater virtue and forgiveness than they do to others. This is observed in fundamental attribution error, where individuals tend to view their successes as earned and their failures as matters of chance – but that they deem the opposite for t he fortunes of others.[16]It is a kind of cognitive hypocrisy in which we treat ourselves with levels of consideration and flexibility that we rarely apply to others.

Such unfairness is commonly applied to our principles, too, which led Immanuel Kant to coin the “categorical imperative,” a rule under which actions must pass a test of universality before being accepted.[17]Kant’s imperative can be loosely translated to mean that we should stick to our principles whether the circumstances are in our favour or not.

This plays out in any comparison of abortion versus the recent abuse of the unvaccinated during the COVID pandemic. In this recent article Mounting COVID frustration is no reason to abandon fundamental principles, it was shown that the question of whether to vaccinate for COVID-19 or not, may be understood through the four principles of biomedical ethics. The principle of autonomy states, “The patient has the right to make choices regarding their own health care.”[18]As discussed in both BIG Media articles, many people – including the sitting Prime Minister of Canada” – did not respect this principle.

And yet, this principle of autonomy – that the patient should make decisions regarding their own bodies – lies at the heart of the abortion debate. The woman’s medical autonomy and freedom of person is essentially the same right as the decision to avoid or undertake a vaccination. One might expect that everyone who sided against vaccine mandates would support the woman’s right to choose, and the converse. But this is no the case for many, including Prime Minister Justin Trudeau, who was quick to announce his pro-choice position, in contradiction to his public stance on vaccine mandates.[19]

It may seem out of keeping to compare a recent, and hopefully transient, pandemic response to the issue of abortion, which has caused misery, shame, and trauma in so many women worldwide. But this is to Kant’s point: principles must stan beyond circumstances. If politicians and justices were more consistent in their principles, decisions on these issues might not turn out as they have.

Trampling the rights of one group does little to protect the rights of other groups. Kant’s categorical imperative requires principles to survive circumstances and our own small, often selfish, experience.

A critical look at arguments around abortion

Let us now delve into some of the specific moral arguments around abortion through a series of descriptions illustrated in the graphics below. The first box examines the two sides of the question of whether or not a fetus has rights, because, once born, a human being has rights. On the side of the anti-abortion (green) side is the statement that since the fetus could be born – and, if born, has rights – the fetus must have rights. On the pro-choice side (blue), the argument is that future rights have no bearing on the present. Although stated in terms of bare logic, some humility must be taken because we know we are speaking of the fate of women and of unborn babies.

Readers will make up their own minds about potential rights, however the mother’s rights were indisputably declared by the U.S., Canada, and the UN in the descriptions earlier in this article.[20][21] 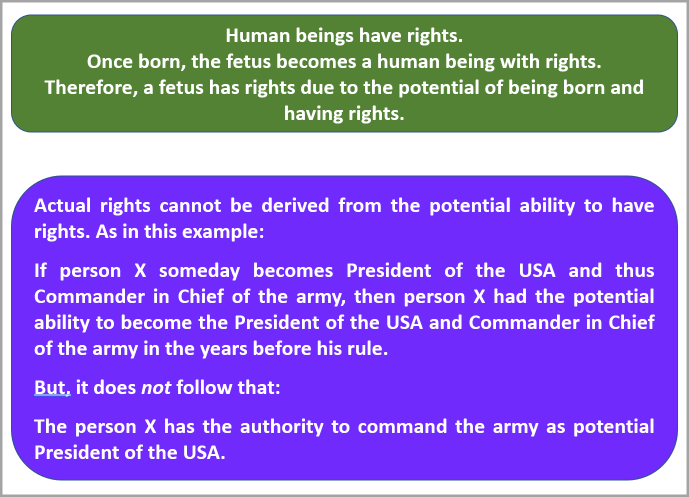 The two opposing arguments regarding the potential rights of the unborn. The example against such a right is given in a paper by Joel Feinberg.[22]

The second example, the Sickly Violinist, examines the right of the fetus to live as opposed to the mother’s right to her own freedom of life, liberty, and security of person. [23]It follows the idea of whether it is correct to imprison and deprive a person of their rights in order to keep another person alive. The example is an uncomfortable one, but as in the potential rights example above, it is instructive through a change of circumstances but maintenance of principle. 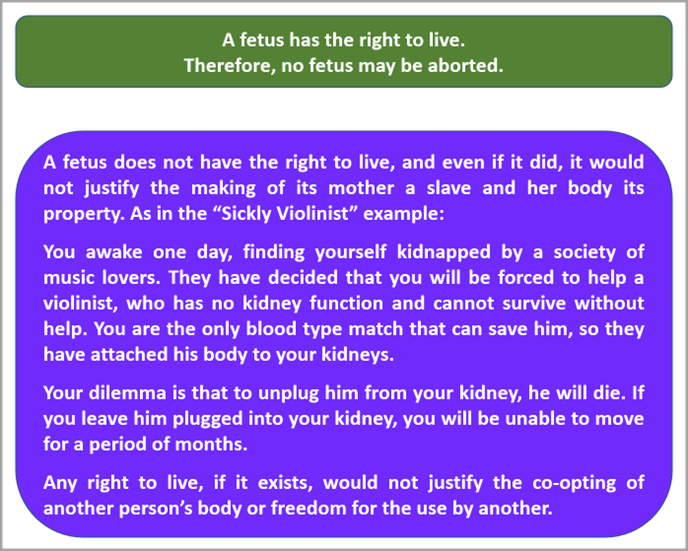 The Sickly Violinist example was created by Judith Thomson.[24]It refutes the argument that the fetus’s right to live supersedes the mother’s right to her own body and freedom.

There are anti-abortion groups that seek to reduce or prohibit the use of contraceptives because they may sometimes cause abortions, and because they prevent a potential conception.[25][26][27]One of the arguments being used is inspired by Pope John Paul II’s statement that “Despite their differences of nature and moral gravity contraception and abortion are often closely connected, as fruits of the same tree.”[28][29]By suggesting that the right to even a potential conception should supersede an actual, living, human is to take the argument against abortion to an endpoint. And this opens the door to a new test of logic.

Reductio ad absurdum is a concept in logic that supports a claim by demonstrating that the opposing claim leads to absurdity.[30]This journey to an endpoint in logic is a test against absurdity itself. In the example below, we follow the argument even further and expose logical outcomes that few would support. In this case, it is exposed that the contraceptive argument can only be true if the eggs have more rights than both the women in which they reside and the men who should be inseminating each and every egg. 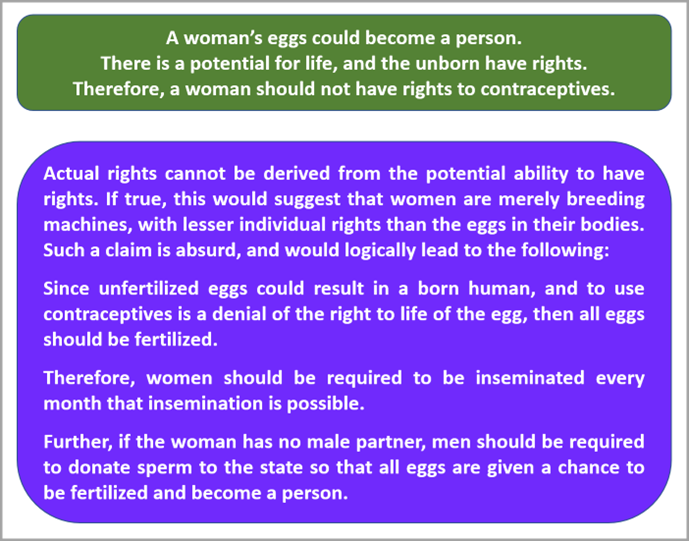 An example of reductio ad absurdum, where the argument against the right to contraceptives leads to extreme conclusions that demonstrate that the original argument cannot be valid.

The abortion debate is deep and painful, and not to be taken lightly. It involves an assessment of rights, and a critical evaluation of argument. Taken to its endpoint, in a logical argument of reductio ad absurdum, where the woman’s eggs must be given greate rights than the woman herself or the argument against abortion fails, the state’s primacy on such personal matters is unsupportable.

[7] Inter-American Commission on Human Rights, 1948, American Declaration of The Rights and Duties of Man

[9] Government of Canada, Guide to The Canadian Charter of Rights and Freedoms, Section 7

[11] Inter-American Commission on Human Rights, 1948, American Declaration of The Rights and Duties of Man

[13] Government of Canada, Guide to The Canadian Charter of Rights and Freedoms, Section 7

Lee Hunt
Lee Hunt is the author of the Dynamicist Trilogy. He was formerly a professional geophysicist, CSEG Distinguished Lecturer, and is currently a writer and ironman triathlete.
Previous articleFBI and MI5 heads warn of ‘immense’ threat from China
Next articleDiving beneath the surface of the energy transition discussion