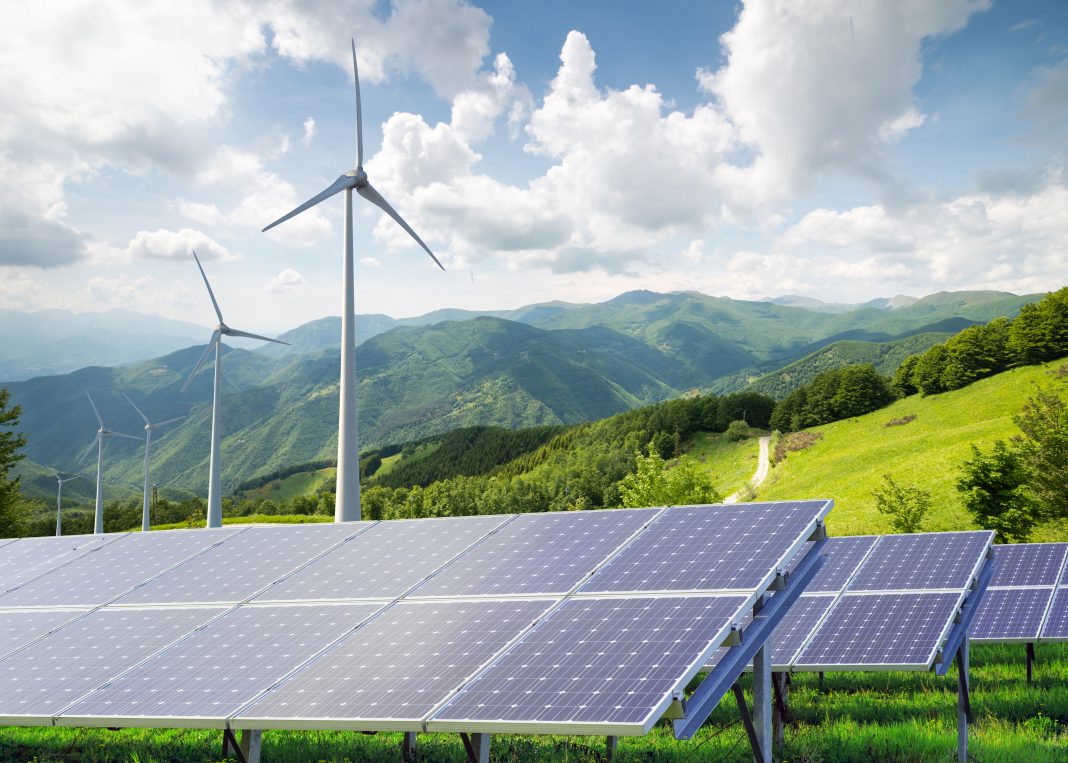 Like much of public debate today, discussions on renewable energy, especially as presented in the media, can be dominated by starkly polarized viewpoints. Depending on one’s political or personal views, a vista of towering wind turbines can be construed as a credit to human ingenuity and problem solving, harvesting nature’s abundant energy for a marginal cost of near zero and using it to build a more sustainable future … or as a blight on the horizon no more pleasant to look at or environmentally beneficial than the hydrocarbon plants they were meant to replace, or worse as totems to flighty thinking and patchy technology, a giant greenwash that doesn’t have any more substance than the wind on which it is intended to run.

These divergent views remain despite the fact that the dominant technologies in the renewable energy revolution – wind and solar – are reaching an age and scale beyond which they can no longer be considered emergent or experimental. In the 20 years since the start of the 21st century, these technologies have seen investment and development on a global industrial scale. These developments have generated much data and a sub-industry of academic and industrial research that can chart the progress of these technologies and predict where they are headed.

(Note: hydro energy is not considered a new-era renewable alongside wind and solar, primarily due to its more limited potential for future growth. For example, hydro penetration has remained essentially flat over the past decade at least in part because many potential rivers have already been utilized for hydro generation.)

Many believe that renewables have passed a tipping point and are ready to assume their role as the dominant energy forms in modern society.

U.S. President Joe Biden has declared bold plans for renewable and clean energy with the goal of reaching net-zero emissions by 2050 and with the intention of investing $400 billion over 10 years.12

While the Biden energy plan does not pick technology winners, referencing other “clean” energy options such as bio-fuel and carbon sequestration alongside renewables, there is no doubt that the core renewables of wind and solar are counted on to be major contributors to the plan. Some aspects of The Biden Plan for a “clean energy revolution” pertaining to wind and solar include: grid-scale storage at one-tenth the cost of lithium-ion batteries; using renewables to produce carbon-free hydrogen at the same cost as that from shale gas.

This represents a significant bet that these technologies are ready, or can be made ready, to make massive contributions in the future, although the distant emissions target date of 2050 leaves ambiguity regarding the timing of those contributions.

Meanwhile, RethinkX, a think tank known for making bold predictions on technological transformation and disruption, has forecasted that it will be both possible and economically affordable to meet 100% of U.S. electricity demand from a combination of wind, solar, and batteries by 2030.3

As these bold forecasts are released publicly, detractors point to the fact that renewables still comprise a relatively small component of the energy mix, and that the technology is currently not capable of forming the backbone of the energy grid. In the recent documentary Planet Of The Humans, executive-produced by Michael Moore, a political commentator generally associated with the progressive side of the political spectrum, presented renewables as largely unreliable and requiring large-scale investments in hydrocarbon-based generation, particularly natural gas, to compensate for the problem of intermittency.4

Are we on the cusp of a renewable energy revolution that will completely alter the technological landscape toward 2030? Is the road much longer than that? Or are the mainline renewable technologies of wind and solar plagued with terminal issues and destined for a marginal role in the generation mix? This series of articles aims to take a numbers-based view, quantifying the current state of renewables and using historicals to chart a logical trajectory.

Examining the current state of renewables5

Charting how the contribution of renewables has progressed across the last decade in specific markets, as well as worldwide, provides a view on the status and direction of the various sectors. The United States and China were selected for analysis because they are the world’s largest markets, while Germany was selected as a major market that has invested heavily in renewables.

Visualizing the data on the penetration of the key renewables alongside total electricity grid contribution for 2010-2019 shows a mixed picture on the overall status of wind and solar.

Examining the penetration figures shows that these renewables experienced strong and sustained growth through the decade. The contribution of wind to the overall electricity grid grew by more than 200% in Germany and nearly 400% in China. Solar experienced even stronger growth rates, growing more than 8,000% in the United States and 1,700% globally.

On the surface, those numbers look impressive. However, viewing the contribution of wind and solar in the context of the overall electricity mix, it could be argued that the growth rates are magnified by small-denominator effects. Similar to a penny stock jumping dramatically on a junior exchange, the 8,000% growth of U.S. solar was from 0.03% of total U.S. electricity in 2010 growing to just more than 2.5% in 2019. Even after a decade of strong growth, these renewables remain modest contributors to the overall energy picture, with some combination of the baseline sectors of coal, gas, nuclear and hydro forming the bulk of electricity production in all markets. Even in Germany, the most advanced of the major markets, wind and solar provide about one-quarter of total electricity. On the other hand, the strong growth rates that ran through the decade have shown no signs of slowing down entering the 2020s, with robust growth rates seen in all markets in 2018 and 2019.

These trends suggest that wind and solar are at a crossroads. Strong growth rates have increased penetration – largely at the expense of coal generation – to the point at which they are making material contributions to the overall grid. However, wind and solar are a long way from being principal components of the energy grid. The data indicates that market dominance is a distant dream. That said, if growth levels from the previous decade were to continue through the next decade, wind and solar will have arrived as major players.

Examining the future of renewables

Criticism of renewable energy sources tends to focus on a few key limiting factors that prevent mass adoption and necessitate a continued reliance on incumbent technologies such as coal, gas, hydro, and nuclear. These technical critiques of renewables can be grouped into three major issues:

This series aims to present a data-based perspective for each of these factors to help determine if renewables are likely to continue rapid growth through the next decade or if they are destined to forever play the role of extras in the big picture.

The underlying incentives and investment that have driven renewables growth over the past decade have been primarily motivated by a concern for the environmental impact of incumbent industries. The prevailing sources of concern have been climate-change impacts associated with the burning of hydrocarbon fuels, along with such issues as air pollution (smog) and containment risks of nuclear fuel.

Substantial research has been conducted in the life-cycle environment costs of all of the major electricity generation technologies. Life-cycle assessment is an analysis technique for measuring the “cradle to grave” environmental impacts, including all steps of a product or service supply chain. For energy-generation technologies, this would begin at raw materials extraction and carry through manufacture and construction to operation/generation.6Coal generation’s life-cycle assessment, for example, would account for the impact of coal mining all the way through final combustion. For wind, it would include the impact associated with metals mining (iron, copper, aluminum) required to manufacture the turbines, as well as the manufacture and construction required to install the turbine.

Because climate change has been the issue of largest concern, the majority of life-cycle research has focused on greenhouse gas (GHG) emissions. There is a more limited body of research for other environmental impacts such as water use and land footprint. However, even for these factors, data exists to paint a picture of the relative impacts of each of the major energy-generation options.

Looking at the data, 789we can see that renewables provide substantial GHG-reduction capability relative to hydrocarbon-based generation. Median assessment shows renewable GHG emissions per unit of generated energy to be at least an order of magnitude lower than hydrocarbon sources. For example, solar carbon intensity is approximately 10% of the intensity of gas generation. Coal generates more than 50 times the carbon emissions relative to wind on a per-unit-energy basis.

We can use this data to calculate the GHG emission benefit of renewable additions to the electricity grid. The benefit of renewable additions is relative to the electricity mix to which they are added. For example, adding wind to a grid that was dominated by hydro would have lower GHG benefit than the same addition to a grid dominated by coal. Using data from different electricity markets around the world alongside life-cycle emissions for renewable sources, it is possible to calculate the amount of time it takes for a renewable generation source to offset the GHG generated during its supply chain and life cycle. Various studies have shown that wind turbines have a carbon payout period in the range of six months to a year, after which time they have compensated for the carbon generated during their manufacture and construction and therefore contribute net GHG reduction for the remainder of their operational life.1011For this reason, it is clear why governments have targeted renewables integration as a driver of carbon emissions reduction.

The data on non-climate environmental impacts is not as clearly positive for renewables. The numbers show that renewables also offer improvements in water consumption relative to coal or gas.12 However, the picture is mixed when it comes to overall land use, with solar panels requiring a large land footprint to produce electricity.1314 When it comes to materials requirements, hydrocarbon fuels are obviously more efficient than renewables. This is due to the fundamental difference in energy-density for hydrocarbon fuels relative to renewable sources. Hydrocarbons provide energy in a highly concentrated form allowing for concentrated energy generation at a single source such as a power plant. In contrast, renewable sources tend to be more dispersed and require more infrastructure over a larger geographic area. Generating electricity at a mass scale requires a large number of solar panels or wind turbines, all of which are manufactured from raw materials that need to be sourced, primarily through mining.

Overall, the data on environmental impacts shows that wind and solar provide clear carbon reduction benefits over hydrocarbon sources. Outside of climate-related impacts, there are tradeoffs between generation technologies, with renewable offering reduced water consumption but requiring significant additions in resource inputs and associated land-use impacts.15

Stay tuned for the other two articles in our renewable energy series:

Jesse Keith
Jesse Keith is an engineer with an economics and data science background whose expertise lies in project evaluation, planning, development, and improvement. His skillset is interdisciplinary and crosses boundaries between technical analysis, economics and data science. He enjoys digging into problems to find new ways of solving them.
Previous articleGoing against grain this Valentine’s Day
Next articleDoctored-baseball speculation soaring