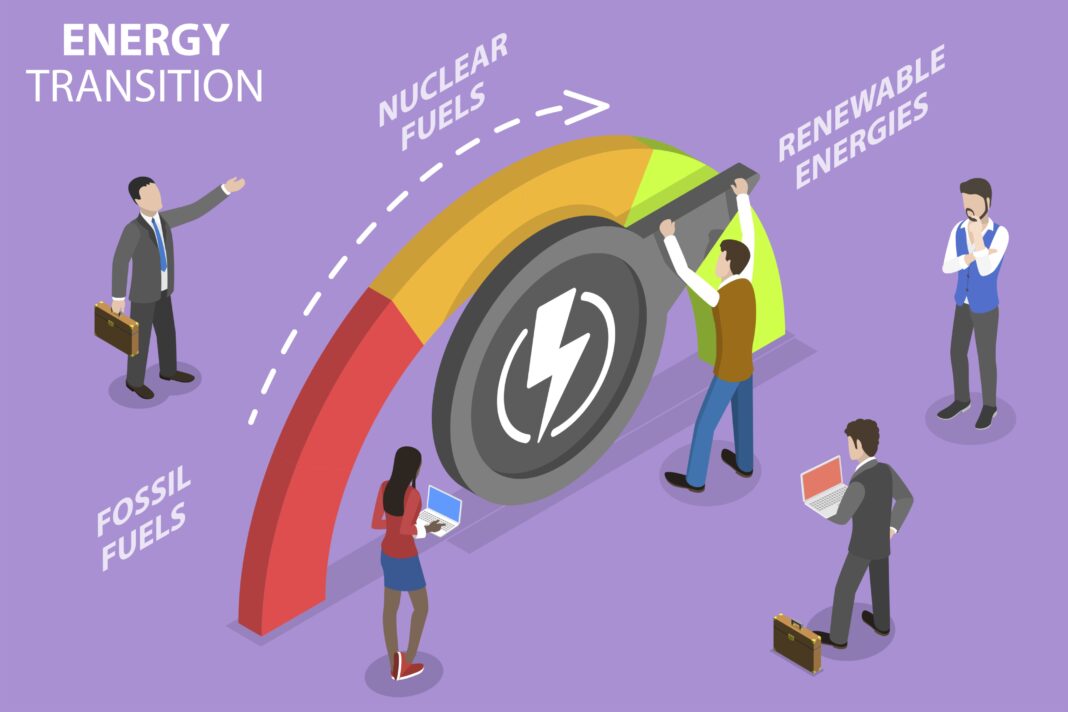 I have written a lot in the last year on the so-called “Energy Transition”. In fact, it is one of my favourite subjects, and I am working with the University of Alberta Future Energy Systems Signature Area and the Canadian Society for Evolving Energy (formerly Canadian Society for Unconventional Resources) to create a Massive Open Online Course (MOOC) called “The 21st Century Energy Transition – How do we make it work?”. Watch for it late this summer on Coursera.

The dictionary definition of transition is “movement from one position or stage to another.” That seems pretty straightforward – moving from the energy systems that support us today to those that will support us in the future.

But in doing my research for the MOOC, I discovered that not everyone could agree on what “energy transition” actually means. Some take it as a gradual process, creating a more diverse energy mix in the future while maintaining energy security, availability, and affordability. Others see a quick shift away from fossil fuels (coal, oil, and gas) to a world powered by renewable energy, designed to meet specific greenhouse gas (GHG) emission targets. The Positive Energy Group at the University of Ottawa calls these two viewpoints “Reality 1” and “Reality 2”, respectively (Beck and Richard, 2020).

In fact, few people like the term “energy transition”. Many leaders surveyed by Beck and Richard found it to have negative connotations – too vague, non-inclusive, or even pejorative – while others saw it as a euphemism understating the scale of future changes deemed necessary to accomplish emission-reduction objectives. In other words, it has become a term loaded with implied meanings beyond the dictionary definition.

In the MOOC, we use “energy transition” in its simple dictionary sense, and we do so because the term is used widely, everyone understands at least the basic concept, and there is no better alternative in general use.

Looking at past energy transitions, Smil (2014) published a graph showing how new energy sources – first coal, then oil, then natural gas – grew in importance after they first achieved 5% of total global energy supply (Figure 1). We see that 60 years after coal first provided 5% of global energy needs (in 1840), it was responsible for 50% of total world energy supply. Sixty years after oil first reached the 5% level (in 1915), people derived 40% of their energy needs from oil and oil products. And natural gas – it provided 5% of world energy needs in 1930, and 60 years later had just passed 25% of total energy supplied. 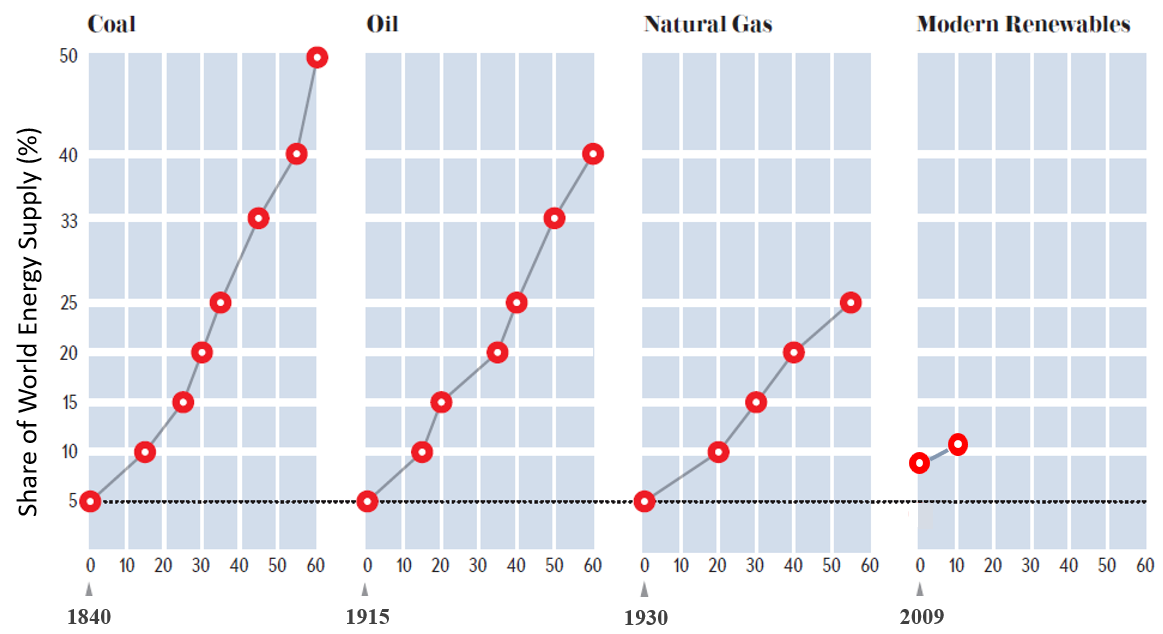 The graph on the right depicting modern renewables (wind, solar, hydroelectricity, modern biomass, and geothermal) is not yet complete. They were at 8.7% of world supply in 2009, and grew to 11.2% in 2019 (I don’t have a good measure for when they were at 5%, but it was more than 20 years earlier, primarily on the strength of hydroelectricity).

So why is the growth of modern renewables apparently so slow compared to the earlier growth of coal, oil, and gas? Well, it is actually not slow at all, but only appears to be when using this measurement metric – percentage share of world energy supply.

When coal arrived on the scene in the early 1800s, global energy consumption was small. There were only about one billion people in the world, and almost all of them consumed little energy – basically wood, peat, and organic debris (vegetation and animal dung) for heating and cooking. Sailing ships used relatively tiny amounts of wind energy, and water wheels supported a few early industrial tasks. Coal replaced some of these applications, but for the most part added to the energy supply with the explosion of steam engine technology and other Industrial Revolution advancements, including electricity generation late in the 19th century. Later, when oil and gas emerged, they did not replace much coal, but instead fueled demand growth arising from expanding populations, widespread electrification, and new technologies such as automobile and aviation fuel systems.

A key point here is that energy demand has grown by leaps and bounds in the past 200 years. We burn far more coal today than we did in 1900, when it was at 50% of world energy supply – but the supply pool is much larger, so coal’s share is smaller. Each new energy source has supported increased energy consumption, but there is no single dominant fuel because our energy supply is much larger and more diverse. In fact, humanity burns more wood and organic debris for energy today (some of it termed biomass) than it did in the early 1800s when wood and biomass comprised close to 100% of world energy supply.

Modern renewables have grown tremendously in absolute terms over the past 20 years, as wind, solar, geothermal, and biomass technologies improve, and many new generation facilities come onstream. But global energy demand continues to rise, and coal, oil, and gas consumption all continue to grow – such that modern renewables are hard pressed to meet even energy demand growth, let alone replacing some of the energy produced by older energy technologies.

So, with regard to the 21st-century energy transition, we are not at a starting point. Instead, we are 200 years into humanity’s modern energy transition, which has produced a much larger and more diverse energy supply. The addition of modern renewables is a continuation of this trend, and our energy supplies will continue to grow and diversify in the coming decades, including growth in nuclear fission (and maybe fusion), wave and tidal, and various energy-storage technologies.

These historical trends do not support the viewpoint that humanity must quickly and drastically replace much of our current energy generation with low-GHG-emission sources over the next couple of decades. Figure 1 suggests that modern renewables will be at perhaps 20% of total supply by 2050 if energy demand growth continues.

To have a chance at changing this relationship, humanity must reduce energy consumption substantially, so that low-emission sources can grow into a shrinking supply pool, and more quickly assume a dominant position. That makes good sense – but we live in a world where half of humanity doesn’t even have access to a reasonable electricity supply, and where citizens of modern countries are not changing their behaviour to reduce energy consumption (more walking and cycling, smaller vehicles, less travel, etc.). So how will energy demand reduction occur?

Well, a number of groups believe that reducing GHG emissions is so important that governments will simply have to make them happen. A recent report by the Rocky Mountain Institute claims “Technology deployment to reduce the carbon intensity of steel is slower than what these [emission targets] pathways require, implying that drastic demand-side interventions will be required to reduce the sector’s carbon footprint.” (Blank et al, 2022) In other words, if industry cannot revolutionize the highly fossil-fuel-intensive technologies of steel-making in the next few years, the world will simply have to produce much less steel.

Really? In countries where people vote for their governments, is it likely they will support a drastic reduction in everything steel related? Smil (2022) called steel one of the Four Pillars of Modern Civilization, “forming countless visible and invisible critical components of today’s world.” Given recent military and economic actions of autocratic countries such as Russia and China, we can be quite sure that they will not agree to reduction of steel production any time soon.

Steel-making is but one example of colliding priorities between energy supply and GHG emissions control. There are many groups such as the Rocky Mountain Institute that see every facet of our lives as subordinate to emissions regulation. In fact, many people are working hard right now to change the global energy mix by impeding development of fossil fuels, in the name of emissions reduction and a more rapid transition to low-emission fuels. Many more are working hard to develop new low-emission energy generation and storage technologies, but are beginning to see major challenges in technological limitations, supply-chain shortfalls, and the very real timelines of planning, financing, and building new energy sources.

Where do we go from here?

The Russia/Ukraine war has accelerated conflicts between GHG emission targets and the practical challenges of accelerating an energy transition that is arguably already running at breakneck speed. The results are playing out in Europe and Asia in the form of energy shortages and rapidly increasing energy prices, attributable in part to failure to develop diverse energy sources, including domestic oil, gas, and coal resources. Faced with the choice between inadequate energy today and the emission targets of tomorrow, consumers are demanding more coal- and gas-fired electrical generation regardless of the emission costs.

North America has been largely spared the energy crisis of the 2020s so far by virtue of its enormous domestic energy resources. Even those are threatened as it becomes very difficult to build new oil and gas infrastructure, and coal- and gas-fired generation is shut down before adequate and reliable replacements are in place and generating.

Abundant, affordable energy is critical to the survival of humanity. Energy transition is ongoing, and we can certainly do things to improve and even accelerate it. But we must do that with intelligent and informed energy planning.

An emissions plan is not an energy plan. We cannot hope to supply the energy that humanity needs by planning for net-zero GHG emissions by 2050, or any other date. Instead, we need smart energy planning that includes strong actions to minimize environmental impacts, including emissions. The people of this world – all energy consumers – will not accept anything less.

Beck, M. and A. Richard, 2020. What is “Transition”? The Two Realities of energy and environmental leaders in Canada.

International Energy Agency, 2021. Net Zero by 2050 – A roadmap for the global energy sector.

Smil, V., 2021. Grand Transitions – How the Modern World was Made. Oxford University Press.

Brad Hayes
Brad Hayes has a PhD in geology from the University of Alberta and is president of Petrel Robertson Consulting Ltd., a geoscience consulting firm addressing technical and strategic issues around oil and gas development, water resource management, helium exploration, geothermal energy, and carbon sequestration. He is an adjunct professor in the University of Alberta Department of Earth and Atmospheric Sciences.
Previous articleKey outcomes of long COVID identified in international study
Next articleLegal claim seeks $800 million in damages for iPhone users