Wicked problems are our business – and yours 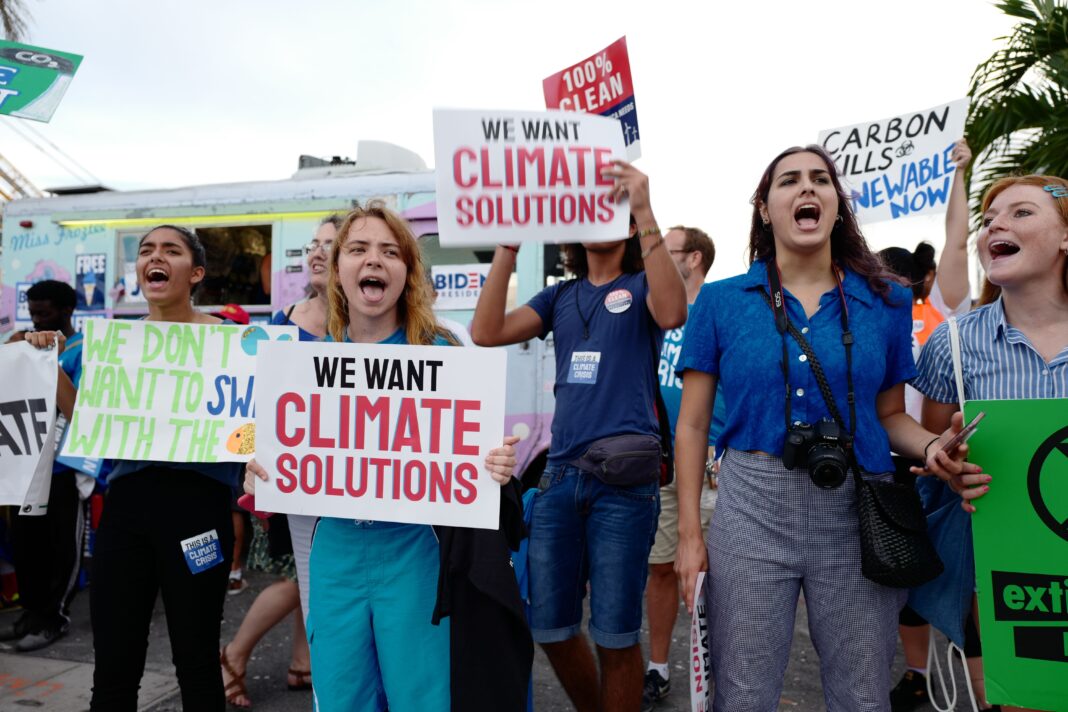 BIG Media Ltd. has covered controversial issues including abortion, the decision to vaccinate or not, bioethics, the legality of drug use, misinformation, fracking, the energy transition, and climate change. Providing calm, objective news coverage to readers on these matters is a formidable challenge. In fact, readers might at times feel some of these topics are intractable.

This article aims to alleviate some of the frustration over our own news coverage at big-media.ca, and that of others, by explaining what wicked problems are, why they exist, and what we can watch for from the various actors.

What is a wicked problem?

We take our definition of wicked problems from a synthesis of many sources.[3][4][5][6][7]And we particularly borrow some of the language and structure in describing this class of problem from a policy paper by Nancy Roberts.[8]A wicked problem has several elements that earn the “wicked” title. First, and most fundamentally, the problem and solution are in some level of dispute. Lacking sufficient framing, any resolution is inevitably challenging. Second, the problem often has a degree of information uncertainty and an inter-related complexity of consequences. These uncertainties and complexities lead to a third element – competing stakeholders. Someone stands to win or lose, and each competing entity represents a different preference or value.

Wicked problems often involve the public, either through governmental laws, regulations, or decisions, which serves to add complexity including political considerations. 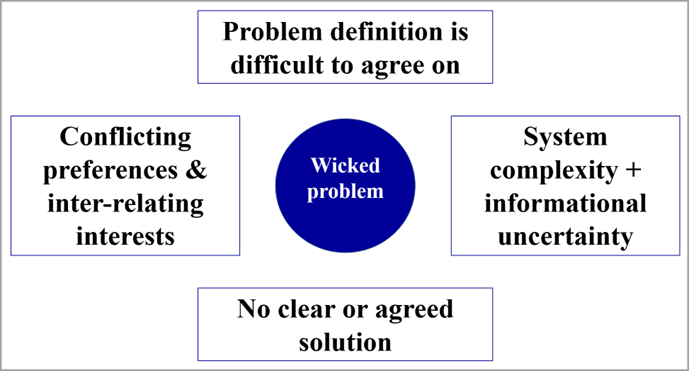 A different kind of complexity

Fixing a car might be complicated, but, in general, expert mechanics will be able to diagnose and treat automobile problems in a consistent fashion. Even many problems in advanced mathematics and physics, for all the requirement of deep background, are approached in a similar fashion by experts in these fields.

These are not the complexities we speak of when we discuss wicked problems. We are speaking of a complexity in framing the problem and its solution. As in the illustration below, simple problems could be termed as problems of any technical difficulty that are well framed. Complex problems are defined as those that have a well-understood definition, but a disputed solution. And wicked problems endure an unresolved battle over both the definition of the problem and its solution.

There are many strategies to manage or “tame” wicked problems. Some of these involve compartmentalizing the issues to uncertain results.[15]Tamed, compartmentalized, or not, wicked problem solvers must face the fact that there are numerous stakeholders. Approaches may therefore be classified by how conflicting entities are handled. These classes can be defined by the following strategies, each with its own advantages and disadvantages:[16]

There is no universal agreement on the best approach, but healthy democracies might see governments apply the minimal necessary regulatory structure and trust that some combination of collaboration and competition among its talented population might find the best solution. After all, democracies depend upon the education and talents of its citizens.[17]

Who are the actors – climate change example

Climate change has been termed by some as a super-wicked problem due to its technical complexities, uncertainties, and intense and impassioned competition over the definition of both problem and solution.[18][19]

Climate change is, as examined by BIG Media Ltd.’s Brad Hayes in recent articles – Diving beneath the surface of the energy transition discussion, Examining the real meaning of ‘energy transition’ in the face of undeniable historic trends, and Is it really ‘now or never’ to stave off climate disaster? – a complex issue. It has significant questions and conflicts associated with the definitions of its problem and solution.[20][21]This includes a consideration that there are many causes of climate change, some anthropogenic and some – e.g., changes in Earth’s orbit and axis of rotation, and variations in the Sun’s luminescence – that are not. Further, the climate response to these inputs are themselves complex.[22]For example, consider the negative feedback effects of the carbon cycle, where Earth’s oceans and land take up and absorb excess carbon. These effects have been shown to create a material modification to climate warming expectations from too-simple models of anthropogenic CO2 emissions.[23]Complexities in the scientific understanding of climate science are unwelcome in the context of a desire to immediately solve the problem. However, these concepts are deeply relevant. And this kind of uncertainty alone goes a long way to making the climate-change problem wicked.

But the truly wicked part of the climate problem does not reside within debates over climate models and the relative anthropogenic portion of the issue. The most intractable part of the problem is in how many different inter-related entities and endeavours are affected by climate-change mitigation, and how deeply these entities conflict and compete.[24]Climate change involves a fundamental human need: energy, and some of the consequences of energy. As outlined in Hayes’ articles, a poorly thought-out response to the climate challenge can lead to energy shortages, which can have acute consequences to human life and happiness. The list of those involved, affected by, and interested in this challenge is quite long. See the figure below, which ultimately includes everyone.

Competition amongst these entities is fierce. The governments of Canada, the United States, and many parts of the world are exerting their authority on the climate-change problem through budgetary tools that provide funds to some entities, and through penalties such as taxes and caps that may punish or limit other entities.[25][26]This leads to jockeying for funds or a fight against – or an effort to gain business certainty about – caps and taxes. This competition carries forward in climate events, such as the recent COP26 meeting, where lobby groups of some industries sought to win favour from governments worldwide.[27][28] 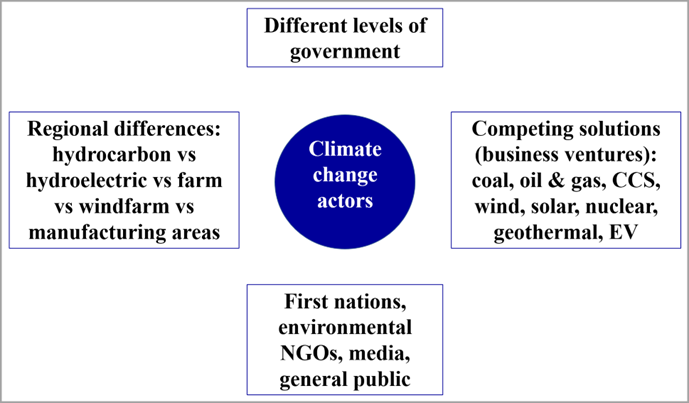 Watch all actors, beware the bad ones

Wicked problems most commonly intersect with public policy, and therefore are managed directly or indirectly through some level of government. It is necessary for some level of authority to be exerted through decision making and/or regulatory frameworks. While it is clear that all of the involved parties will have a self-interest in the problem, and should therefore be monitored, the governing body or regulatory authority requires the most scrutiny since they ultimately make the decisions or set the regulations. After reading this article and considering the wicked problems in their lives, readers may ask, “Did the governing body act with sufficient understanding for all groups involved? Was there sufficient consultation? Did they harness the competitive or collaborative skills of the industries and interests available to create a solution with the best and fairest long-term consequences?”

Best and fair may be difficult to define, which is part and parcel of the wicked problem. However, there are recent examples in the news where this may be examined. The ongoing Government of Canada fertilizer proposal has been met with claims that the government did not undertake sufficient consultation with the stakeholders.[29]Questions around the impartiality of Environment Minister Stephen Guilbeault have abounded since he was chosen for his post – as he was a member of Greenpeace, an environmental lobby group, and was once arrested for actions associated with that lobby.[30]We offer no opinion on the minister’s objectivity, but examining the issue is rational and does not qualify as an ad hominin attack since the minister’s impartiality on his ministerial file is relevant to his past associations and actions on matters related to the environment.

Whether the government or regulatory body is impartial, fair, and consults to the correct degree is a question for readers to consider.

What is the root problem, and how do we move forward?

The root issue with wicked problems is that they involve different stakeholders. The complexity of consequences associated with each issue and its potential solution create a conflict between groups and the values they represent. Ultimately, it is this conflict that prevents the clear framing of the problem or agreement on what a solution might look like. Because this is so, wickedness describes a potential dysfunction among policy actors that must be recognized. 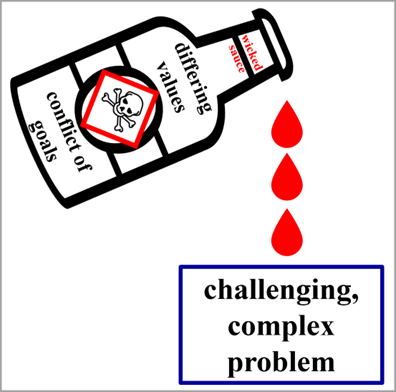 Figure 4: A BIG Media depiction of a wicked problem. All of the defining models of wicked problems involve a conflict of values, or goals, injected or poured over technically complicated issues, poisoning the possibility of a solution.

Through the act of being recognized, this dysfunction might at the very least be understood by the public. We should be able to point at a problem such as climate change and realize that our biggest challenges in moving forward lie in differing values, interconnecting consequences, and circumstances. Knowing this could possibly mitigate some element of the divide. We might also become more adept at calling out the manipulation of policy by one self-interested group or another. Even if the solution is not abruptly solved by understanding this, we may be better off by knowing that these wicked problems are really problems between people. And if we are feeling particularly brave, we might look in the mirror and ask what part we as individuals are playing.

For wicked problems are our business.

[2] Termerr, Catrien, et al, 2019, A critical assessment of the wicked problem concept: relevance and usefulness for policy science and practice, Policy and Society, V38, No 2, 167-179

[3] Termerr, Catrien, et al, 2019, A critical assessment of the wicked problem concept: relevance and usefulness for policy science and practice, Policy and Society, V38, No 2, 167-179

[9] Termerr, Catrien, et al, 2019, A critical assessment of the wicked problem concept: relevance and usefulness for policy science and practice, Policy and Society, V38, No 2, 167-179

[15]Termerr, Catrien, et al, 2019, A critical assessment of the wicked problem concept: relevance and usefulness for policy science and practice, Policy and Society, V38, No 2, 167-179

[18] FitzGibbon, John, and Kenneth Mensah, 2012, Climate Change as a Wicked Problem: An evaluation of the Institutional Context for Rural Water Management in Ghana, SAGE, April-June 2012: 1-14

Lee Hunt
Lee Hunt is the author of the Dynamicist Trilogy. He was formerly a professional geophysicist, CSEG Distinguished Lecturer, and is currently a writer and ironman triathlete.
Previous articleWave created by Tonga eruption reached 90 metres tall
Next articleSuper sales for super carmaker – Lamborghini sold out till 2024